Positive changes in Ontario the result of ombudsman’s efforts

Positive changes in Ontario the result of ombudsman’s efforts 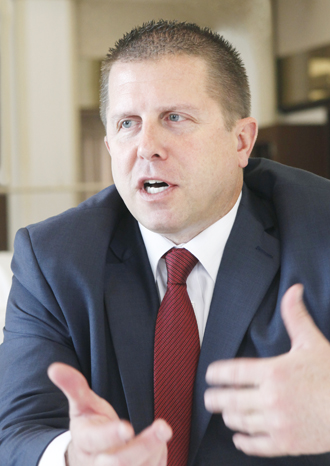 The proclaimed role of the modern-day ombudsman is to serve as a protector of democracy as well as an advocate for a nation’s public interests. In cases of neglect or corruption by state-run bodies, the ombudsman is there to safeguard citizens’ livelihoods and rights.

However, some existing ombudsman offices often face immense challenges and hurdles in effecting change, and some critics argue that these public advocates should be more aggressive in investigating and pressuring powerful government institutions amid pressing public complaints.

But Andre Marin, who has served as the ombudsman of Ontario, Canada, since 2005, has defied that skepticism and succeeded in bringing about tangible change in provincial sectors, including social services and the prison system, as well as the billing system for a state-owned electricity company.

The Korea JoongAng Daily recently sat down with Marin to discuss his role as an official watchdog.

Q. Your office receives some 20,000 complaints each year. What do they mostly concern?

A. The most common complaints to our office are about social services, the bureaucracy that distributes child support payments between divorced parents and the prison system - matters like inmate complaints about violence, lack of access to health care or poor conditions.

However, this past year, we received 26,999 complaints in total, of which 6,961 were about the government-owned electricity provider, Hydro One. This is the largest number of complaints we have ever received about a single government body. We are conducting a systemic investigation into Hydro One’s customer service and its billing practices.

Many people received unfairly high, inaccurate electricity bills, and in some cases the agency took thousands of dollars out of their bank accounts. We have already resolved many of these complaints, and Hydro One has apologized to the customers, but our investigation into the root cause of these problems is continuing.

You have launched investigations into different irregularities in different sectors. What’s the most rewarding case you have settled?

Many of our investigations have affected millions of people. For example, our 2007 investigation of the government-run lottery found corruption among ticket-sellers, and resulted in a much more secure system for all lottery players in Ontario.

However, I would have to say the most rewarding case was our investigation into the screening tests that are done on all babies born in Ontario to detect preventable diseases. In 2005, Ontario was only testing for two disorders, even though the testing technology was developed in Ontario. This meant that 50 babies died or were left severely disabled each year from diseases that could have been detected at birth. After our investigation, the number of tests increased, and today all babies are tested for 29 disorders at birth. This has saved the lives of hundreds of children.

The Hydro One case has gained a lot of attention, receiving an unprecedented number of complaints. Where do you think the problems lie surrounding billing practices?

In many cases, customers did not receive bills for several months, and then they received large “catch-up” bills that did not accurately reflect the electricity they used. We have even had a few complaints from individuals whose houses burned down, but they continued to receive Hydro One bills, even though their houses were destroyed by fire.

A large number of customers complained that Hydro One refused to listen to their concerns and would not refund their money even though the bills were unfair. This is a sign that the culture of the corporation needs to change.

Ombudsman offices need to serve as watchdogs for powerful agencies and institutions, but sometimes they are not permitted to investigate key departments. What do you make of this? And what kind of efforts are you making to resolve this?

Under Ontario law, my office can investigate more than 500 provincial government ministries, corporations, agencies, boards, commissions and tribunals. However, there is a large part of the public sector that receives billions of dollars from the Ontario government but remains outside of the jurisdiction set out in the Ombudsman Act.

This includes hospitals, municipalities, long-term care homes, universities, school boards and the child protection system. In Ontario, this is a historical problem - because these bodies are considered at “arm’s length” from the provincial government, they were left out of the act in 1975, and no government has sought to change it since. Every Ombudsman since 1975 has called on the government to change this.

When I became Ombudsman in 2005, I started counting the number of complaints we received about these bodies that we were not able to investigate, and I report on them every year in my annual report. This has helped draw a lot of public attention to the issue, and there have been many petitions from the public and from politicians for change.

This past year, we received a record 3,400 such complaints. Also, for the first time, the government introduced legislation to expand my office’s mandate to include some of these bodies. If the legislation is passed, it will demonstrate the success of many years of speaking publicly and persuasively about this issue - an important job of any Ombudsman.

You are an active user of social networking sites. How do you use your official account for your job?

We use social media as a communications tool to reach tens of thousands of people directly. This supplements the traditional communications methods we use to publicize our work in the news media, which also reach millions of people each year. We use Twitter, Facebook and YouTube most often.

The Twitter account is run by me - the messages are written and posted by me, unless otherwise noted. About 80 percent of my posts are about my work; about 20 percent are more fun, personal comments. This shows my followers that I am a “real person” and the account is authentic.

Although we do not take complaints through social media, I do answer questions and share news on Twitter. I have more than 23,000 followers, and many of them are influential journalists and public officials.

Our Facebook account is run by my communications staff, and they use it to share news and post items about our office. Both Facebook and Twitter are very effective for sharing official news as well as things that are interesting to our followers but don’t warrant a traditional press release. We post on both accounts several times a day.

As for YouTube, we use it for sharing our official videos - press conferences and summaries of our reports. It is a very useful way for the public to watch our news conferences, unfiltered by the news media.