Abe to lift some unilateral sanctions on North

Abe to lift some unilateral sanctions on North 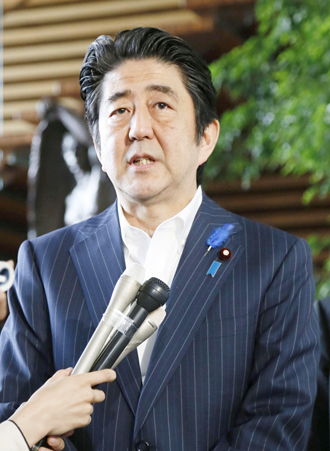 Prime Minister Shinzo Abe announced yesterday that the Japanese government has decided to lift some of its unilateral sanctions on Pyongyang in return for North Korea setting up a committee to reinvestigate the fate of Japanese abductees.

Senior officials from Japan and North Korea held talks in Beijing on Tuesday about the North’s pledge to hold a full-scale investigation into Japanese nationals abducted to North Korea in the 1970s and 1980s.

In late May, after North Korea-Japan bilateral talks in Stockholm, Abe announced that Pyongyang vowed to launch an investigative committee, and that in return, Japan would start to lift some of the sanctions it imposed on North Korea once the special committee was set up.

Japanese media reported that Abe is more or less satisfied with the outcome of the talks in Beijing this week and appears convinced of Pyongyang’s sincerity in following through with the investigations.

The unilateral sanctions include lifting of some travel bans and loosening of oversight of remittances. The Japanese media reported that Tokyo may waive the requirement to report remittances of more than 100,000 yen ($1,000) in cash to North Korea. It will also allow North Korean ships to enter Japanese ports for humanitarian purposes.

The unilateral sanctions are separate from broader sanctions imposed by the UN Security Council.

Should Pyongyang actually produce and repatriate Japanese nationals, analysts point out this could be a turning point in the relationship between the two countries, which do not have bilateral relations because of the abduction issue.

South Korean Ministry of Foreign Affairs spokesman Noh Kwang-il responded yesterday by emphasizing that Tokyo should not take any measures “to obstruct South Korean, U.S., Japanese and other international cooperation in regards to North Korea’s nuclear and missile programs.”

At the same time, Noh said that the Korean government hopes “that the issue of Japanese abductions will be resolved at an early date as it is a humanitarian issue,” urging transparency from Japan as it proceeds with the situation.

The announcement from Tokyo coincided with Chinese President Xi Jinping and South Korean President Park Geun-hye’s summit in Seoul, where North Korean denuclearization was one of the key topics discussed.

The breakthrough comes after a long stalemate between Tokyo and Pyongyang on the abduction issue since North Korea admitted in 2002 to having abducted 13 Japanese nationals.

North Korea returned five abductees and their families to Japan and said the remaining eight were dead.

Tokyo claims that 17 of its nationals were abducted and that more abductees are alive than North Korea admits.

The Nihon Keizai Shimbun reported yesterday that at the Beijing meeting earlier this week Pyongyang officials handed over a list that included at least 10 survivors still in North Korea.