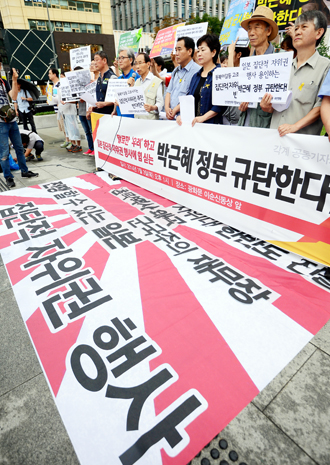 The response of the Korean people to the Shinzo Abe administration’s move to enable Japan to exercise its collective rights to self-defense - the biggest shift in military posture since World War II - ranged from apprehension to alarm.

By international law, all countries have the right to collective self-defense. But Japan’s constitution had blocked it from exercising any right to wage war outside its borders.

Abe’s cabinet’s decision on Tuesday to reinterpret the war-renouncing Article 9 of its constitution, drafted with U.S. supervision in 1947, has been met with critical eyes by Seoul and Beijing as well as international media, in part because of general distrust of the Abe administration and its denial of Japan’s bloody past.

“Japan is involved in a scheme of historical revisionism, as with the unresolved comfort women issue, and at the same time, it has gained the right to wage war outside of its borders,” said Japan-Korea relations expert Jo Yang-hyeon, a professor at the Korea National Diplomatic Academy.

The development comes a year ahead of the 70th anniversary of Japan’s 1945 defeat in World War II. For neighboring countries, Japan’s brutal colonial rule and invasions are not-so-distant memories, and the unhealed wounds are chafed by inflammatory and historically insensitive remarks and actions by Japanese right-wingers in Abe’s government and around it.

“As a country that has invaded other countries, Japan should ideally show proper repentance, which it hasn’t,” Jo pointed out. “Korea, as a victim country, is uneasy.”

Last month, a government-initiated “reexamination” of the 1993 Kono Statement apologizing for forced sexual slavery of Asian women during World War II concluded that secret consultation between Seoul and Tokyo dictated the final wording of the statement, undermining the testimony of 16 Korean victims that was formerly thought to be the basis of the apology. This was seen as Abe’s attempt to belittle or marginalize the landmark apology without actually denouncing it.

Simultaneously, the Abe administration has been building up its military ambitions by overhauling defense policy and even easing a ban on weapons exports in April.

Korea’s Ministry of Foreign Affairs spokesman said in a statement Tuesday, “The Japanese government in regards to defense and security issues should dispel doubts and concerns stemming from historical revisionism and behave properly in order to win confidence from its neighboring countries.”

“I think the U.S. and Korean perspective on this is on the same page [in terms of historical issues], that Japan should show repentance for its past if it wants to beef up its defense role,” Jo said. “The U.S. told Prime Minister Abe not to go to the Yasukuni Shrine, and expressed the view that the [unresolved] comfort women issue is a horrible one. Japan is keen on expanding its military but has been unresponsive in terms of historical issues.”

Ben Rhodes, President Barack Obama’s deputy national security adviser for strategic communications, told reporters Tuesday that Washington would “very much want to see Japan and Korea to continue dialogue to address not just collective self-defense but also some of the issues around historical tensions that have emerged in recent months.”

While there is a deepened rift between Seoul and Tokyo in regards to historical issues, Washington has encouraged bolstering the military alliance between Seoul, Washington and Tokyo to counter regional threats such as North Korea.

Such cooperation is closely linked to security in the Northeast Asian region, riddled with tension amid China’s growing military capacity.

A trilateral security pact between the U.S., Korea and Japan cooperation could potentially isolate China, which continues to have tense relations with Tokyo because of territorial and historical disputes.

“Korea is in a position of hoping to work well with both the U.S. and China,” Jo said.

Abe has been a proponent of amending Article 9 since his first short-lived term as prime minister from 2006 to 2007. After he took office in December 2012, Abe pushed to lower the bar for constitutional amendments through a revision of Article 96. That ambition fizzled out.

Deputy Chief Cabinet Secretary Katsunobu Kato announced on Wednesday that a legal team has been set up under the National Security Secretariat, the administrative office of the National Security Council, to draft legislation to enable Japan’s limited rights of collective self-defense to be passed in the Diet later on in the year.

Korea’s greatest concern is Japanese forces entering its territory through the so-called right to collective self-defense.

On the day of Abe’s defense policy shift announcement, the chairmen of the Joint Chiefs of Staff (JCS) of South Korea, the United States and Japan met in Hawaii Tuesday for defense talks. This was the first time Korea’s Adm. Choi Yun-hee, U.S. Gen. Martin Dempsey and Japan’s Gen. Shigeru Iwasaki met in person, and they agreed to trilateral cooperation on North Korea’s nuclear and missile threats.

Korea’s Joint Chiefs of Staff said in a statement that Choi “made it clear that Japan’s self-defense right cannot be exercised without South Korea’s explicit consent in cases affecting Korea’s security and interests,” a point which Dempsey and Iwasaki “agreed upon.”

Jo pointed out that “under international law, Japan will not be able to enter Korean territory” but said that “with diplomatic situations, you don’t know how things will turn out, that is why we have stated we will be monitoring the situation.”