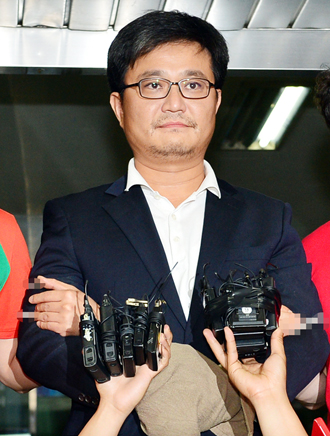 A Seoul councilman was sent to the prosecution for further questioning yesterday over allegations that he abetted in the murder of a 67-year-old man surnamed Song.

Kim Hyung-sik, a 44-year-old member of the Seoul Metropolitan Council, is also suspected of receiving bribes from the victim, for which he has yet to be charged.

“In order to prove the bribery allegations, a thorough investigation by prosecutors is required,” said a Gangseo Police Precinct official.

Dressed in a suit, Kim did not respond to questions from reporters as he entered the Seoul Southern District Prosecutors’ Office. His expressions appeared mixed, and he kept his head lowered, sometimes noticeably clinching his teeth.

The councilman’s friend, only identified as Paeng, was also sent to the prosecution yesterday for questioning over the murder. He had already been detained by authorities.

Paeng stands accused of having killed Song in March using a hatchet and a stun gun. He testified earlier that Kim had asked him to kill Song, who was well-known for his wealth and properties worth 300 billion won ($297 million). In exchange, Kim told him that the debts Paeng owed him would be canceled.

After sending the case to prosecutors, police said that there was circumstantial evidence to suggest that Song gave 520 million won to the councilor with the expectation that Kim would designate the victim’s land as a business district. Once designated as a commercial district, area property values typically spike.

The investigator initially alleged that the two were in a creditor-debtor relationship, and that Kim developed a hatred toward the affluent Song after he insisted that the councilman pay off his debt.

However, the investigation surrounding Kim has expanded as additional allegations have surfaced.

The councilman is also suspected of pocketing bribes offered by the chairman of AVT, a railway parts supplier. The Seoul Central District Prosecutors’ Office alleges that Kim received about 30 million won between 2009 and 2010, in exchange for favoring the parts company in project bids.

According to authorities, Kim also reportedly asked for an additional 10 million won in early 2012, claiming that he was helping a friend, citing Paeng’s name.

Police added that the AVT chairman, surnamed Lee, and Kim met right before the councilor was detained.

Meanwhile, the AVT chairman is involved in a separate unfolding bribery case.

A senior deputy spokesman of the ruling Saenuri Party, who is accused of bribing a high-ranking official from the Korea Rail Network Authority, recently testified that he did so at Chairman Lee’s request.

Kwon Young-mo, the Saenuri spokesman, allegedly handed over 40 million won to Kim Kwang-jae, the former president of the railway authority, in the hopes that the state-run agency would award orders to the parts company. Kwon, who is on the board of AVT, was summoned for questioning on Wednesday.

Kim and Kwon are both graduates of Yeungnam University and are believed to have developed close ties. The Saenuri Party held an emergency meeting yesterday in which it decided to remove Kwon from his positions.

The railway industry has come under strict scrutiny since April, when the Sewol ferry disaster shed light on the culture of collusion between public officials and the industries they regulate.

Last month, the chairman of Sampyo E&C, a local railroad construction and parts company, was arrested over allegations that he bribed high-ranking officials from the Korea Rail Network Authority in charge of awarding contracts. At the time, Kim Kwang-jae was also investigated in connection with the corruption case.