The forum at the Hotel Shilla in central Seoul, drew about 500 Korean and Chinese business leaders and government officials.

“This is the first business forum attended by the leaders of the two countries since diplomatic ties were established,” Park said in her speech.

“The two countries’ economic cooperation should be shifted from the manufacturing industry to services, energy and other new industries,” she said. “Joint efforts on global issues like energy, the environment and climate change should continue, too.

“We also need to increase businesses’ entry into each other’s domestic markets and establish a stable trade environment by signing the Korea-China FTA.”

“To strengthen economic cooperation between China and Korea, there needs to be a new system and efforts,” said Xi. “With a long-tern perspective, we should establish China-Korea free trade zones. The two countries can build joint industrial zones to increase cooperation on new energy, materials, telecommunications and the environment.”

The forum was a hot spot for business diplomacy.

Hyundai Motor Chairman Chung Mong-koo said he would “ask Xi about approval for the company’s Chongqing plant.” Kumho Asiana Chairman Park said he “heard a positive response from Xi on relocating its plant in Nanjing.”

On the Chinese side, there were Jack Ma, CEO of e-commerce giant Alibaba, Baidu CEO Robin Li, Huawei CEO Ren Zhengfei and Tian Guodli, chairman of the Bank of China.

“China and Korea are close neigbors like a mouth and tongue,” said Tian. “They are highly complementary to each other. And Samsung is the most-loved brand in China.”

At an economic forum Thursday, the two governments announced they will designate the Bank of Communications’ Seoul branch as a yuan clearing bank. The central banks of the two countries signed a memorandum of understanding on the issue. 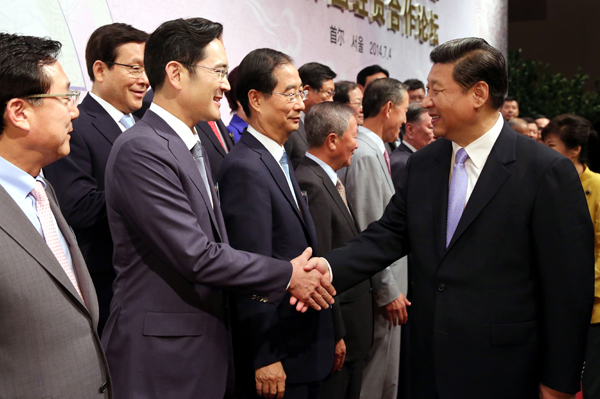 Korea becomes the fifth country in the world after Taiwan, Singapore, Britain and Germany, to have a yuan-clearing bank.

“The future of the Internet will become a common issue for the two countries,” said Li of Baidu. “The two countries should be proud of today’s event. I met with Samsung’s Jay Y. Lee last year, and we have attained many achievements from our cooperation since then.”

After the forum, Samsung’s Lee and LG Chairman Koo Bon-moo escorted Xi for a mini exhibition of their products displayed at Yeongbingwan, a separate venue in the hotel.

Lee explained about the products to Xi.

LG also exhibited its flagship products, ranging from a 105-inch curved UHD TV and its latest G3 smartphone to and electric vehicle battery and related parts.

For his part, Xi said, “LG’s new energy and IT businesses are impressive.”

According to LG Group, Xi showed interest in the 77-inch curved UHD OLED TV, saying the “screen is very thin.”

The forum also provided a practical opportunity for businesses to sign memorandums of understanding.

LG Chem signed an MoU with the People’s Government of Nanjing City for a joint venture to develop and produce electric vehicle batteries.

SKC signed an MoU with TCL to supply parts for LED TVs and smartphones.

Prior to yesterday’s forum, the Korea Chamber of Commerce & Industry held a meeting with Korean and Chinese business people to give them the opportunity to better understand each other’s business mindset and discuss for opportunities. The session was held in the morning at Lotte Hotel in Sogong-dong, central Seoul.

Su Bo, president of Macrolink Real Estate, cited the popular Korean drama “My Love From the Star,” which exceeded 3.7 billion views in China, and emphasized that companies of both countries should first thingk about what people want in they wan to prosper together.

In a presentation on the Chinese real estate market, Su said China is passing a golden era and entering a silver era.

“Bold investments and high returns are a thing of the past,” he said. “But silver is certainly a valuable metal. There is still growth potential, and the market will be able to maintain qualitative growth.”