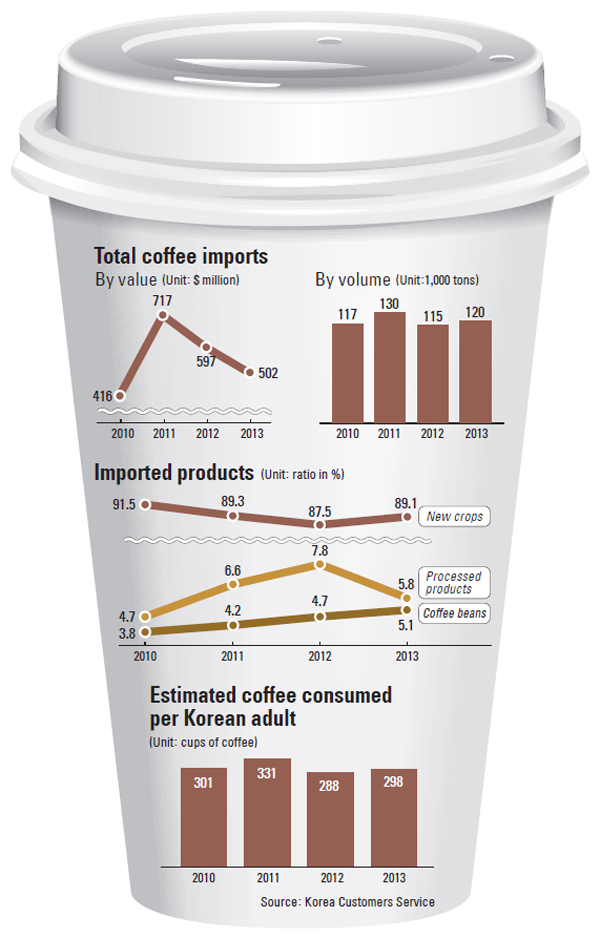 It’s no surprise that Koreans are some of the heaviest coffee drinkers in the world.

But how many cups did a single Korean adult drink last year? According to the customs office, in 2013, one adult drank 298 cups of coffees, given that an americano uses about 10 grams of coffee and that there are 40 million adults over the age of 20 in the country. That’s an increase of 3.8 percent from the previous year, when adults consumed 288 cups each.

The Korea Customs Service reported yesterday that 120,000 tons of coffee was imported last year, a 4 percent increase from the previous year with 115,000 tons. But by value, coffee imports dropped by almost 20 percent from $597 million to $502 million. The decrease is largely due to the falling price of new bean crops, which declined from $17.09 per kilogram in 2012 to $15.93 last year and dipped further to $14.47 as of May.

New crop beans can be roasted for use in coffee drinks sold at shops such as Starbucks or Coffee Bean and can also be used to make processed coffee products.

Last year, 107,113 tons of new crop beans were imported, which is an almost 7 percent increase from the 100,228 tons imported in 2012. This year, imports have expanded 14 percent in the first five months compared to the same period last year, to 49,404 tons. As of last year, beans from new crops accounted for 89.1 percent of all imported coffee products. That figure grew to 91 percent in the first five months of this year.

Processed coffee, on the other hand, has been falling significantly. It tumbled nearly 22 percent last year to 6,989 tons imported and has seen a sharp drop of 35.6 percent to 2,191 tons in the first five months. This indicates that Korean coffee drinkers are not interested in processed goods like instant coffees and instead want their coffee brewed fresh out of a machine.

Before the FTA took effect in March 2012, the customs tax on U.S. roasted beans was 8 percent. This year, tariffs on U.S. coffee beans are at 3.2 percent.