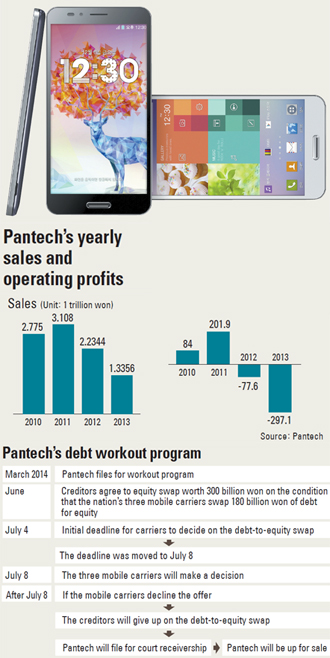 The telecom companies have been silent after creditors of the debt-stricken phone maker last month requested they participate in a debt-to-equity swap, leading the creditors to move the deadline for agreeing to the swap from yesterday to Tuesday.

Pantech’s creditors said they would carry out a debt-to-equity swap worth 300 billion won ($297 million), which would postpone the principal repayment due by 2018. But they said they would only make the swap if the three mobile carriers also exchanged 180 billion won worth of debt for equity, as it is unclear if the creditors’ short-term financial support will be enough to revive Pantech.

Should the carriers decline to invest in the company through the swap, the creditors will suspend the debt workout program and file for court receivership to put the company up for sale.

The telecom giants have shown no interest in the debt exchange, even though they will lose their 180 billion won when the company goes into court receivership.

The creditor banks, including the Korea Development Bank (KDB), will not continue the corporate workout program if all three mobile carriers do not agree to the swap.

“As Pantech lacks brand value compared to other smartphone makers and the capital needed for marketing and production, it seems impossible to revive. Even if the carriers and creditors carry out the equity swap, it will be difficult for Pantech to recover without additional financial support,” said a spokesman for a mobile carrier. “Also, if we become major shareholders, we will have to continue carrying out additional debt-to-equity swaps. In that case, our loss will get bigger.”

If the creditors suspend the debt workout, Pantech will have to repay the loans suspended by the banks.

Pantech will likely have no choice but to file for court receivership because it can’t repay its loans, not to mention obtain the 100 billion won to 260 billion won of estimated operating capital it will need this year.

When the company goes up for sale, industry observers predict that it will be acquired by a Chinese company, which seeks to obtain Pantech’s patents and technologies.

Creditors will be persuading mobile carriers until next Tuesday to participate in the equity swap.

Pantech’s operating profits were in the black in January and February but receded back into the red in March.

It posted an operating loss of 6.7 billion won from January to March for the seventh consecutive quarter of losses.