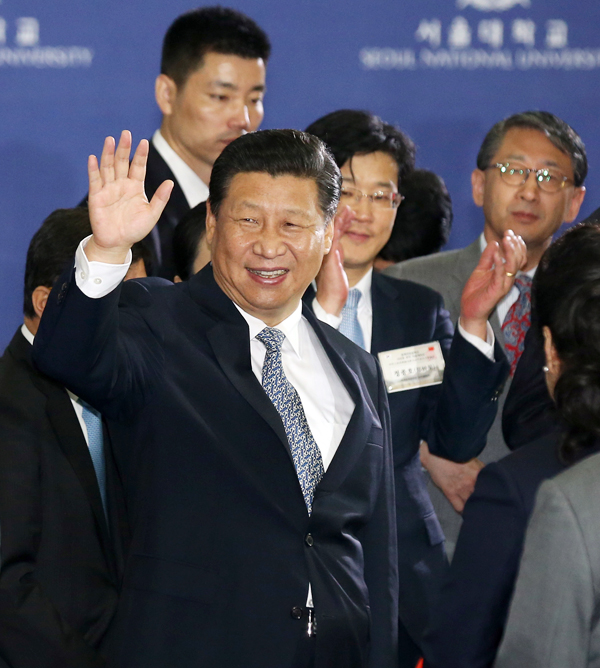 Chinese President Xi Jinping waves his hand to the audience yesterday in an auditorium at Seoul National University after he delivered his speech. [NEWS1]

The announcement came as a surprise because the two leaders refrained from commenting on Japan in a joint statement following their summit on Thursday.

“The two leaders discussed a lot about Japan on Thursday and today, but we didn’t include the discussions in the statement for various reasons,” said the senior secretary.

“They agreed that Japan has taken a revisionist approach [to history] and voiced concerns about the expansion of its military forces and its exercising of the right to collective self-defense.”

The warning came after the Cabinet of Japanese Prime Minister Shinzo Abe approved this week a reinterpretation of the Constitution that would give Japan the right to go into war in defense of allies, reversing a decades-old total renouncing of war.

Japan also initiated a so-called re-examination of the 1993 Kono Statement, which apologized for forced sexual slavery of Asian women during World War II. The re-examination report concluded that secret consultations between Seoul and Tokyo dictated the final wording of the statement, undercutting the statement’s legitimacy as an apology for wartime human rights violations.

The shift in defense posture had already prompted condemnation from both the Korean and Chinese governments - separately until yesterday - and is considered by some neighboring countries as Japan’s attempts to return to its imperialistic past.

Prior to the lunch, Xi delivered a speech at Seoul National University where he struck a noticeably conciliatory tone on the relationship between China and South Korea, while disapproving of Japan’s past imperialism in a nuanced way.

“In the early 20th century, the rise of militarism in Japan led the country to invade the Korean Peninsula and China,” said Xi during the speech.

The lecture was attended by some 500 students, professors and politicians and lasted an hour.

“People in the two countries suffered immensely because of Japan’s brutal invasion,” he continued. “When the war against Japan was at its highest pitch, the Chinese and Korean people shared their suffering and helped each other.”

Throughout the speech, the Chinese leader, who was on the second and final day of his visit to Seoul, emphasized that China and Korea have always cooperated whenever the two countries faced challenges.

His emphasis on the joint suffering under Japanese militarism is interpreted by some analysts as an attempt to form a unified front against Japan.

The North Korea nuclear issue only received partial attention with Xi broadly stressing support for a nuclear-free Korean Peninsula and the resumption of the six-party talks.

During his visit, Xi and Park agreed that the two countries will jointly research other projects concerning the wartime victims of sexual slavery.

Ju confirmed that the two countries will pool their resources to study the historical background of the issue.

During yesterday’s address, Xi told the audience that the bilateral relationship between Korea and China will be strengthened further.

“China and Korea must cooperate in order to open up new opportunities,” he said.

Before the speech, Xi met the speaker of the National Assembly, Chung Ui-hwa.

Chinese media outlets reported earlier yesterday that the Chinese president has offered Park to hold joint memorial events next year in commemoration of the 70th anniversary of the Korean Peninsula’s liberation from Japan’s colonial rule as well as the end of World War II.

Ju told reporters that Park replied that Korea was also preparing events to celebrate the anniversary, which many saw as a turning down of Xi’s offer.