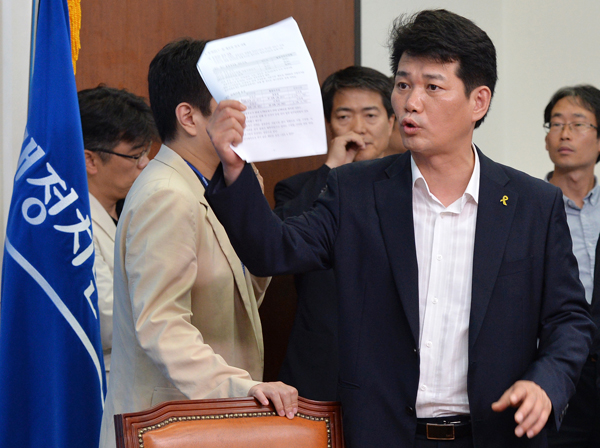 Heo Dong-jun, a longtime NPAD member who has unsuccessfully applied for the Dongjak-B nomination for 16 years, vehemently protests Thursday the nomination of Ki Dong-min for Dongjak B District in Seoul. [NEWS1]

Conflict broke out in the opposition New Politics Alliance for Democracy (NPAD) after a close aide of Seoul Mayor Park Won-soon was named the party’s candidate in one of the most desirable seats being contested in July 30 by-elections.

The leadership of the largest opposition party, which holds 126 seats in the 300-member assembly, announced its first-round of nominations for six constituencies in the upcoming elections. A total of 15 National Assembly seats are being contested nationwide and more nominations will be announced later.

The hottest seat is Dongjak-B District in western Seoul, the only seat being contested in the capital. Although the constituency has elected many liberal lawmakers in the past, former lawmaker Chung Mong-joon from the ruling Saenuri Party broke that tradition by winning in 2008 and 2012. Chung gave up his National Assembly seat to unsuccessfully run against Park in the Seoul mayoral election in June.

Many political bigwigs, such as former Seoul Mayor Oh Se-hoon of the Saenuri Party, have been eyeing the district, considering it a major opportunity for them to re-emerge in the political arena.

The NPAD announced on Thursday that it nominated Ki Dong-min, a former deputy mayor for political affairs at the Seoul city government, who is known to be close to Seoul Mayor Park.

Park won re-election in June by a very large margin. The NPAD leadership explained to its members that Ki is a “fresh face” who isn’t associated with any faction in the opposition, and the nomination would become a symbol of rejecting the party’s factionalism.

But some NPAD members argued that the leadership was trying to win the Dongjak constituency by relying on the reputation of the popular Seoul mayor, and the nomination had nothing to do with the candidate’s qualifications.

Heo Dong-jun, a longtime member of the party who has applied to run for the seat for 16 years but has never been nominated, has been holding a sit-in protest in the office of the leadership since Thursday.

“I’m thinking of defecting from the party,” Heo told local media. “There was no principle behind the nomination.

“Ki and I were comrades who fought against the dictatorship,” he said. “But the leadership unilaterally decided the nomination without consulting with us. Even Ki wouldn’t agree with a nomination on these grounds, and if he does, it means he’s only interested in his own political gain and has abandoned the people.”

A total of 31 NPAD lawmakers issued a joint statement Tuesday calling for Heo to be named the nominee.

The dissenters pointed out that Ki did not apply for the nomination in the first place. In fact, Ki applied for a nomination from Gwangju, South Jeolla, a stronghold of the party.

Keum Tae-sup, a close aide to NPAD co-chairman Ahn Cheol-soo, stepped down from his post as spokesman for Ahn in an apparent protest against the party’s nomination. Keum also applied for the nomination.

“Although the party suggested me for another nomination from Gyeonggi or Incheon, I turned them down,” Keum said at a briefing yesterday.

NPAD Co-chairman Ahn said it was “heartbreaking” for him to see Heo’s protest. Still, Ahn urged members to “abandon their old privileges and make a sacrifice” for the party and accept “a new face.”