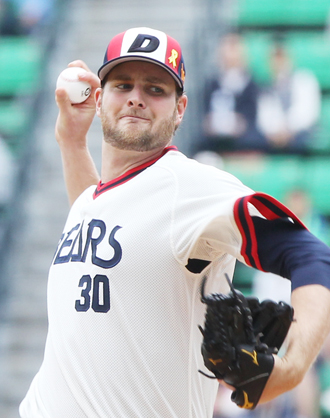 With two weeks to go to the halfway point of the 2014 Korea Baseball Organization season and the July 31 trade deadline looming, teams battling to make it to the postseason are scrambling to improve their chances. Perhaps the best way to do that is to replace foreign players.

On Friday, the LG Twins announced they designated third baseman Josh Bell for assignment then signed a $200,000 contract with Texas Rangers outfielder Brad Snyder. The Twins said Snyder can play outfield and first base, and be designated hitter. They expect the left-handed 32-year-old to add some power to manager Yang Sang-moon’s lineup.

Not long ago, Bell was considered one of the league’s best imports when he led the league with eight home runs and had 20 RBIs and a .313 batting average. After his fast start, he saw a steady diet of breaking balls and struggled. When the Twins cut him loose, he was hitting .267 with 10 homers and 39 RBIs.

“We are in seventh place, but since we’re only six and a half games behind the fourth-place Lotte Giants, we are not giving up on the postseason,” said Yang.

By beating the NC Dinos 2-0 on Saturday, the Twins won their sixth consecutive game, the team’s longest streak of the season.

Sources say the next club to make a move might be the fifth-place Doosan Bears (35-37) and the man on the hot seat is 207 centimeters tall (6 feet, 9 inches) starting pitcher Chris Volstad. The 28-year-old right-hander disappointed his team by allowing six runs in six innings Saturday against the Samsung Lions at Jamsil Stadium. It was his seventh game without a win since he picked up his fourth of the season May 25 against the Hanwha Eagles, despite giving up six runs in five innings. He also has failed to turn in a quality start - giving up three runs or less in six innings or more - since allowing two runs in seven innings against the Dinos on May 17.

When the Bears signed Volstad, the giant pitcher was expected to be one of the team’s twin towers along with 203-centimeter ace Dustin Nippert, but he has struggled with his control, a serious problem for a pitcher who relies on two-seam fastballs, sinkers and sliders.

“I think he has problems controlling his breaking balls,” said one hitter who recently faced Volstad and requested anonymity. “He usually throws two-seams when gets behind in the count. When those breaking balls don’t work out, the two-seams are not that hard to hit.”

“The Bears need to freshen up their lineup, but because they don’t have many options, replacing Volstad may be a turning point for them to make it to the postseason,” said MBC Sports Plus analyst Cha Myung-suk.

The SK Wyverns, who replaced Jo Jo Reyes with Travis Banwart (Cleveland Indians) on Friday, also may be considering ending their relationship with Luke Scott, who has suffered a series of minor injuries since the beginning of the season. Scott has played in only 33 games, hitting .267 with six homers.

The Hanwha Eagles are running out of patience with Andrew Albers (2-8, 7.12 ERA) and the Kia Tigers also would like to bid farewell to closer Jairo Asencio, who is 2-0 with 15 saves and a 4.11 ERA, but they haven’t found any alternatives yet.

“Because clubs generally want to make a fresh start after the all-star break [July 18], there might be some surprise announcements beforehand,” Cha said.