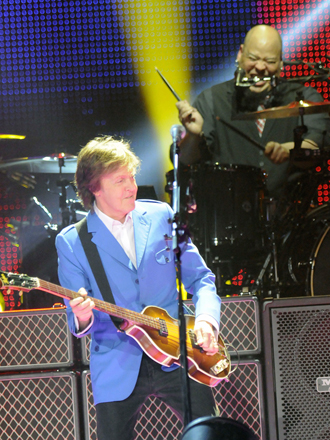 Sir Paul McCartney performs with his band during the “Out There” tour at the Times Union Center on Saturday in Albany, New York. [AP/NEWSIS]

ALBANY, N.Y. - Paul McCartney returned to a concert stage Saturday after being sidelined for two months because of a virus, spinning out songs from the Beatles, Wings and a solo career that has spanned more than 50 years of rock ‘n’ roll.

“It’s great to be back,” said McCartney, who turned 72 two weeks ago. He looked none the worse for wear, putting on a show of just under three hours with 38 songs before finishing with the three-song medley that ends the “Abbey Road” album.

McCartney was briefly hospitalized in Tokyo in May because of the viral infection.

The illness forced him to cancel a Japanese tour and a concert in South Korea and reschedule half a dozen June dates in the United States before resuming his “Out There” tour in Albany.

Before his illness, McCartney last performed May 1 in Costa Rica.

McCartney opened with the Beatles’ “Eight Days a Week.” He wore black jeans and a sky blue blazer. When he took the jacket off four songs in, he joked that it was the only wardrobe change of the evening.

The crowd-pleasing show contained a mix of expected hits like “Hey Jude” and “Let it Be,” four songs from McCartney’s latest album and a generous sampling from more obscure corners of his catalog, including the Beatles’ songs “Lovely Rita” and “Being For the Benefit of Mr. Kite” and Wings work such as “Another Day” and “1985.” Most of the 1980s and 1990s were passed over.

He paid tribute to the two late members of the Beatles, singing “Here Today” to former songwriting partner John Lennon, which McCartney described as the conversation they never had. He began playing George Harrison’s song “Something” on the ukulele, and it built into a full band rendition.

McCartney’s wife, Nancy, was on hand and he dedicated the song “My Valentine” to her. Perhaps one oblique reference to his absence was the new song, “On My Way to Work,” which McCartney said he hadn’t performed publicly before.

During his second encore, he brought a couple from Rochester onstage after the woman held up a sign saying her boyfriend wouldn’t marry her until he met McCartney.

After the man led the audience in a verse of “When I’m 64” to honor his age, he went to his knees and successfully proposed.

“And he booked us for the wedding,” McCartney joked.

It’s a busy year for McCartney, who this winter marked the 50th anniversary of his first appearance on “The Ed Sullivan Show.”

He has 19 U.S. shows scheduled, including one at Candlestick Park in San Francisco, where the Beatles made their final concert appearance in 1966.