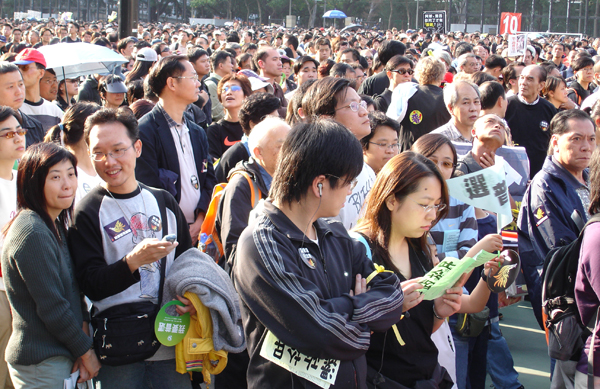 If China wants Hong Kong residents to stop taking to the streets in protest, it should start picking better leaders.

Of course, that’s exactly why an estimated 300,000 demonstrated last week and almost 800,000 voted in a recent unofficial referendum: to gain the right to choose the city’s chief executive officer. China won’t let them and is noncommittal about when, or if, that might happen.

Since July 2012, Leung Chun-ying has stood aside as China clamped down on Hong Kong’s media, tried to make the city less transparent and moved to impose patriotic education on students. His successor, Donald Tsang, spent seven years looking the other way, while Tung Chee Hwa, the city’s first leader, enriched a whole class of tycoons, including Asia’s richest man, Li Ka-Shing.

When you look at the quality of Beijing’s picks, it beggars belief that the Communist Party can’t see why Hong Kongers want greater democracy. It’s equally shocking that China doesn’t get just how much it’s bungling its Hong Kong experiment. Before 1997, when the United Kingdom turned Hong Kong over to China, the city-state was a test case for all things laissez-faire: low taxes, minimal red tape, the rule of law and unfettered capital flows.

But then something got in the way to send income gaps even further out of whack: China. Long before the British returned it to China, Hong Kong was an oligarchic economy. After 1997, though, the concentration of wealth accelerated as China’s influence grew.

Communist Party bigwigs with millions, or even billions, suddenly had ill-gotten dollars to stash and Hong Kong property became an obvious first stop. The torrent of money from China’s nouveau-riche politicians drove real estate into the stratosphere, stoking public discontent. Beijing has tried to make Hong Kong more opaque with proposals to block disclosure of personal data on company directors, muddying who owns what.

Hong Kongers are realizing just how rigged their system has become. Much of the blame must be traced to the patronage politics that shackled the city to Leung, the latest chief executive chosen for his connections, not skill.

As these dynamics become entrenched, Hong Kong is becoming more corrupt and less competitive. It hardly helps that China cowed Hong Kong’s media into censoring itself.

Now, things have gone full circle with even billionaires like Li - who has started investing overseas - worrying about waning trust in the leaders Beijing keeps foisting on Hong Kong. In a June 27 speech, a man who’s benefited royally from the status quo, said he’s worried that “more and more people will lose faith in this system, breeding skepticism towards what is fair and just, doubting everything and believing all has turned sour and rancid.”

What’s fascinating about these sentiments is how they dovetail with Hong Kong’s answer to the Occupy Wall Street movement, Occupy Central. The kind of backlash about which China has long worried seems to be afoot. Students of economics and politics saw this coming. If the last 100 years have taught us anything it’s what happens when wealth and social disparities undermine order.

For all its wealth, Hong Kong is a potential powder keg. About 1.3 million of its 7.2 million people, or one in five, live under the poverty line. Its Gini coefficient, a measure of income inequality, rose to 0.537 in 2011 from 0.525 a decade earlier, and now is 12th highest in the world.

And given the surge in property prices during Leung’s tenure, coming mostly from public servants in Beijing, it’s safe to assume the gap has widened more since then.

Not surprisingly, Hong Kong residents think they can do a better job picking leaders. After all, few of them trust Communist Party leaders to do anything other than feather their own nests while inequality soars in Hong Kong. China’s heavy-handed efforts to contain the pro-democracy movement risks turning more and more of the city’s residents against the mainland.

Many Hong Kongers wonder how their city got to such a fraught place. But when even billionaires fret publicly about the risks of social unrest, and start investing elsewhere, Hong Kong is in trouble. If left to fester, something worse is possible. That’s bad for business in a place where business is supposed to come first.