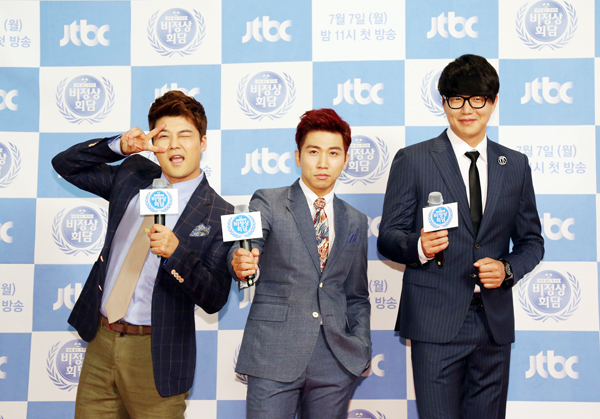 Forthright and unpretentious talk shows are an up-and-coming trend in the Korean entertainment industry these days.

And to fulfill viewers’ expectations, cable channel JTBC, an affiliate of the Korea JoongAng Daily, is ready to launch its new talk show “Non Summit,” which includes 11 foreign men on a regular panel talking about issues of 20- or 30-somethings with the show’s hosts, Jeon Hyun-moo, Yoo Se-yun and Sung Si-kyung.

“The cast of foreign people was because although Korea is reinforcing its position on the global stage right now, it still is just one country among many others,” said the show’s producer, Lim Jung-ah, in a press conference held on Tuesday at Hoam Art Hall, central Seoul. “And I thought perceiving the problems of Koreans who are in their 20s and 30s in a universal perspective was necessary.”

The international panel comes from diverse backgrounds, like Guillaume Patry, a former Starcraft gamer from Canada, or Enes Kaya, a Turkish actor working in Korea.

The show has tried to diverge from the many existing reality programs by tackling somewhat serious issues, such as unmarried couples living together or children claiming independence from their parents.

While there were concerns that the program will not differ much from the 2006 KBS talk show “Misuda,” which had female foreigners discussing global issues, one of the “Non Summit” MCs, Yoo, explained that while “Misuda” was about getting to know one another’s cultures, “Non Summit” will go a step further to suggest what other countries can do to help solve certain problems.

“It is not just about ‘what about your country?’ but about coming up with ‘what’s better?’ together,” said Yoo.

And for that reason, producer Lim explained that she considered fluency in Korean the No. 1 standard when she cast the global guests, since the show requires in-depth discussions.

“It was a chance to realize that our culture, which we perceive as so natural, can be seen by others in totally different ways,” said Sung, noting that it was also an opportunity for him to reflect on himself and Korean culture.

However, one should not worry that the show might get overly serious because the combination of offbeat chatterboxes like these three MCs, along with the 11 other men who are not so different from them, will trigger enough laughs by itself.

“I think the fact that these foreign friends speak Korean so fluently is really funny,” said Yoo. “They joke around in Korean, just like we do.”

The first episode airs today on JTBC at 11 p.m.