Tracing the past in ink on porcelain

Tracing the past in ink on porcelain 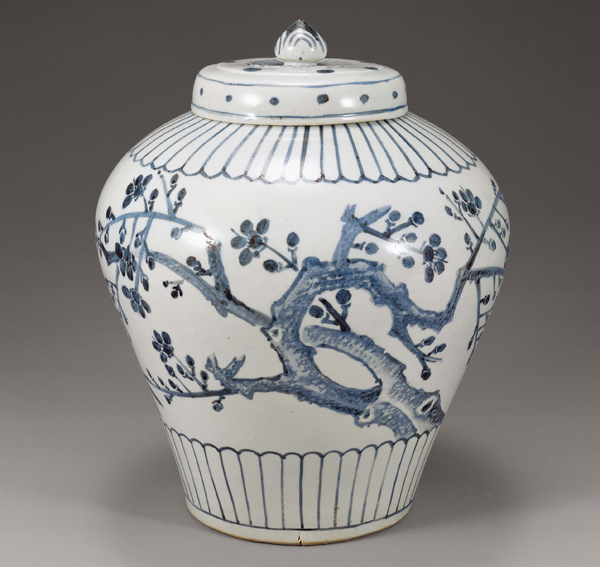 “Blue and White Porcelain Lidded Jar,” National Treasure No. 222, is currently at Horim Art Center. Provided by the center

While people use plastic or glass containers these days to store food or flowers, royal families or aristocrats in the Joseon Dynasty (1392-1910) used white porcelain vessels.

Pots estimated to have been used as vases or as storage in the era are now on display at Horim Art Center in Sinsa, southern Seoul, for the museum’s second exhibition on white porcelain goods this year.

While the first show focused solely on showing pure white jars, the newest exhibit features those decorated with blue ink.

As all the cobalt ink used for pottery making was imported from Islamic countries back in the Joseon era, only top craftsmen had access to it, making such porcelain pieces rarer and more valuable.

“Because there was a limited supply of the pigment, the best painters in the country were asked to paint on royal dishes, and that made porcelain not only a type of pottery but also a masterpiece painting,” said Ryu Jin-hyun, the art center’s senior curator.

In the exhibition, which is divided into three stories spanning the second to the fourth floor, one can find many of these blue-accented white porcelain products on the second and third floors.

On the second story, the art center put “Blue and White Porcelain Jar with Cloud and Dragon Design” in a mirrored room so that visitors can get a good look at the tall, round-shaped porcelain piece. It is covered in a detailed painting of a dragon and clouds, with almost no empty white space on the surface. Painting as much of the surface as possible is an influence of China, Ryu explained. In contrast, the Korean style of decorating pottery shows more use of the empty space in the design.

Soon after you step into the third-floor exhibition room, you are greeted with National Treasure No. 222, the Blue and White Porcelain Lidded Jar With a Plum and Bamboo Design. While what’s featured on the second floor shows a great deal of Chinese influence, experts think that this particular piece shows how Koreans created their own way of painting porcelain.

The jar features bamboo near the bottom and a plum tree on top of it, but it leaves much of the surface area untouched. Even the patterns painted near the top and bottom are very simple.

“It shows how Korea has advanced with pottery marking as well as how it has developed its painting technique on the surface,” said Ryu.

“The Korean style is simpler as patterns and designs take up less space on the surface to show the artistic element of having margins.”

But Korea stumbled in pottery making after the Japanese invasions of 1592 to 1598. The quality of pottery suffered as many talented craftsmen died or were kidnapped by Japan. Also, the supply of blue ink from overseas countries was not as steady.

“The entire pottery making system collapsed, so white porcelain made in the 17th century tends to show a much murkier color than the clear white, and the shape is also not as elegant,” said Lee Won-kwang, chief curator at the center.

As a result, many Joseon-era craftsmen started to use a pigment mixed with iron to continue drawing a pattern or design onto the white porcelain for added beauty.

The iron pigment, different from the one made with cobalt, shows a yellowish - almost black - color when the jars are baked, depending on the baking time and temperature. The texture of the pigment was much more uneven and harsh than the cobalt version, so it was difficult for craftsmen to paint details on top of the white jar.

“Porcelains painted with iron ink look much more lively while cobalt ones are more elegant with the use of different concentration level of the ink,” Ryu said, adding that many porcelain pieces were found to have been made in the 17th century after the Japanese invasion.

“Although the overall quality is not as high, paints with iron ink tend to look more natural as they seem to have been used outside of a palace, mostly at local government offices.”