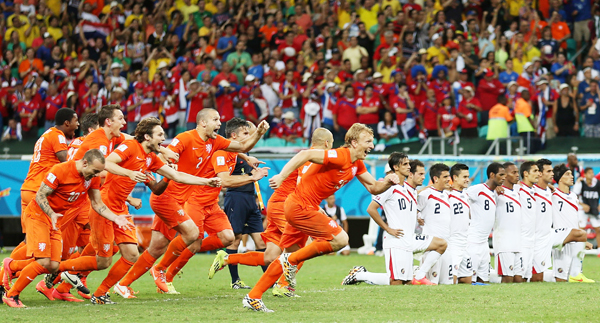 The Argentines didn’t need a late winner from Lionel Messi this time, settling in to protect a 1-0 margin against Belgium that earned them their first trip to the World Cup semifinals in 24 years.

The Netherlands could have used a late goal from Robin van Persie, Wesley Sneijder or Arjen Robben later Saturday but didn’t get one, only edging Costa Rica 4-3 on penalties to set up a semifinal against Argentina.

The 2010 finalists lit up the tournament with 12 goals in four matches but couldn’t find the net in regulation or extra time against underdog Costa Rica. Captain van Persie wasted chances to break the 0-0 deadlock, and Sneijder smashed an 80th-minute free kick into the post and a stoppage-time shot into the crossbar, setting the scene for replacement goalkeeper Tim Krul to be the unlikely hero.

Krul went on in the last minute of extra time - coach Louis van Gaal considering him a better option in the shootout than No. 1 Jasper Cillessen - and made two crucial saves. 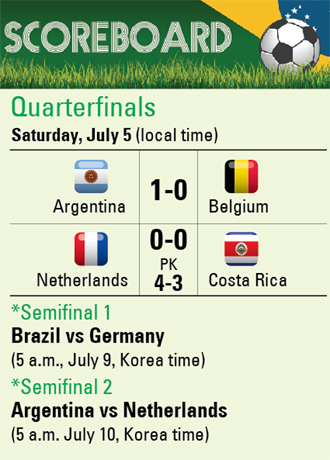 “We had a lot of chances, but it didn’t go in,’’ Krul said on Dutch television. “Then I come in, stop two penalties and here we are.’’

The flood of goals from the group stage slowed to a trickle in the knockout rounds, with the four quarterfinals yielding just five goals. Brazil’s 2-1 win over Colombia on Friday night was relatively high-scoring compared with 1-0 results by Germany against France and Argentina against Belgium.

The low-scoring quarterfinals were slightly overshadowed anyway in the host nation, where millions were still coming to terms with the fact that a back injury knocked star striker Neymar out of the tournament.

Brazil fans at Brasilia’s Estadio Nacional for the Argentina-Belgium match wore face mask caricatures of their talisman and held up signs reading: “Have strength, Neymar. Brazil will win.’’

They were drowned out and outnumbered by tens of thousands of traveling Argentina fans who raucously supported Messi.

The alleged leader of Argentina’s infamous football hooligans, Pablo Alvarez, was among them, but he’s unlikely to be there next time after being detained inside the stadium and is set for deportation.

Messi remains in Brazil after Gonzalo Higuain ended a four-game scoreless streak with a goal in the eighth minute to help Argentina reach the final four for the first time since 1990, the year it lost the final to West Germany.

Higuain picked up a deflected pass from Angel Di Maria and beat goalkeeper Thibaut Courtois with a half-volley toward the far post as he turned.

“Since the first game of this World Cup, I said I was calm, that the goals would come. It came and at an important moment,’’ the Napoli striker said. “It’s been so many years since we made it to the semifinals. Now we did.’’

Messi missed a chance to get his fifth goal of the tournament when he failed to beat Courtois in a one-on-one situation in stoppage time. This time, it wasn’t needed.

Belgium coach Marc Wilmots was critical of Argentina’s approach after taking the lead and described his opponents as “just an ordinary team.’’

“If we had equalized in the last few minutes, they are dead, they are finished,’’ he said.

Neymar was supposed to be there until the end of the World Cup, at least that was the expectation in a country which spent billions hosting the tournament.

But his campaign ended in the 86th minute against Colombia, when he got a knee in the back from Juan Camillo Zuniga that fractured his third vertebra.

His first public comments since then were delivered in a video released Saturday, just before the striker was airlifted from Brazil’s training camp in a medical helicopter to be treated at home - a departure broadcast live on Brazilian TV.

“I don’t have words to describe what has been going through my head and my heart,’’ Neymar said, speaking in a low, quiet tone. “I just want to say that I will be back as soon as possible. When you least expect I’ll be back.

“I won’t be able to fulfill the dream of playing in a World Cup final, but I’m sure [the Brazil team] will win this one, they will become champions, and I will be there with them, and all of Brazil will be celebrating.’’