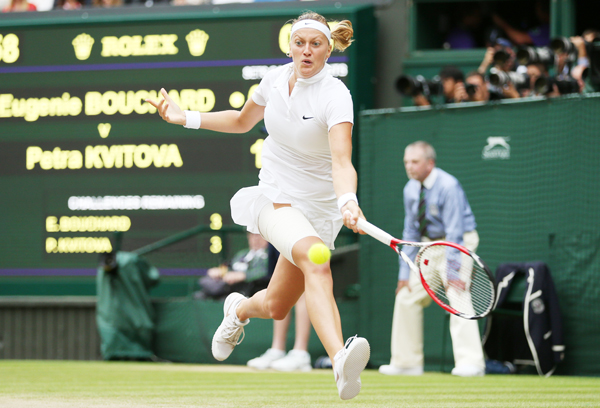 After delivering a final devastating blow, Petra Kvitova lay sprawled on the turf, her arms raised in celebration having crushed tennis’s would-be princess in a Wimbledon final closer to a coronation than a contest.

It took just 55 minutes of thundering forehands and savage serves to hand the Czech a second All England Club title and leave her unwilling victim Eugenie Bouchard licking the wounds of a 6-3 6-0 mauling.

The manner of her victory was unremorsefully brutal. A lesson in the art of modern women’s tennis delivered with such force and conviction it merely begged the question of how it had taken the Czech three years to follow up her last success.

The final point encapsulated the contest - a fierce crosscourt winner that left Bouchard stretching in vain to get her racket on the ball and Kvitova to accept the Venus Rosewater dish and the applause of an awe-struck, if slightly disappointed crowd.

Falling just one minute short of Martina Navratilova’s 1983 record for the fastest women’s final victory, this was a performance so good it had Saturday’s champion reaching into the supernatural realm for an explanation.

“Maybe it was magic,” she quipped.

The pre-match narrative pitched the encounter as a battle between Bouchard’s youthful arrogance and Kvitova’s instinctive wariness, drummed into her after repeatedly struggling to follow up her early success.

The Canadian welcomed comparisons with multiple major winner Maria Sharapova and with remarkable self-assurance for a 20-year-old used words such as “expect” and “belong” after reaching the final.

Bouchard was named by her parents after the queen’s granddaughter, who was watching from the Royal Box, and she freely admits to a princess personality.

The first signs of frustration crept in during the third game when a rasping backhand winner had Bouchard flailing and brought up break point. It was not long before the Czech was clenching her fist in celebration after inflicting a crunching body blow.

Kvitova also showed her defense was watertight as she scampered all over the court to repel Bouchard’s every effort to break through before ending a lengthy rally with a stunning crosscourt winner.