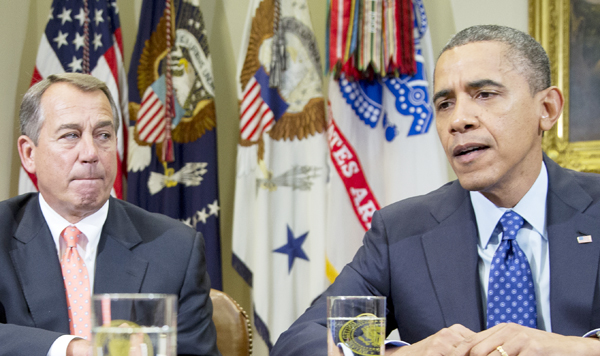 One of the things I wanted to learn while in America was the politics of compromise. Instead of having a scuffle, brandishing an axe or jumping and kicking in the National Assembly, I wanted to witness the sophisticated politics of fine speech and humor. However, the reality was far from my romantic expectations.

Lately, U.S. President Obama and the Republican Party have been blaming each other fiercely. At the end of June, House Speaker John Boehner said he plans to initiate a lawsuit against the president over his use of executive orders. A few days later, Obama announced he would issue an executive order on immigration reform and has urged his Cabinet secretaries to “be creative about how we can make real progress.” On July 1, he said, “So sue me. I’m not going to apologize for trying to do something.” Both sides are proving what uncompromising politics is all about.

Even after experiencing a federal government shutdown last year, communication in American politics hasn’t improved. And not much can be done. Mark Lippert, who has been chosen as the next U.S. ambassador to Korea, is awaiting Senate ratification, one of 49 ambassador-level diplomats on standby. These nominees wait an average of 262 days until they leave to assume their new posts. The government and opposition party are not good at coordinating.

What’s more serious is that the overall federal system is struggling with a similar problem. Political rhetoric dominates all issues, and citizens are increasingly frustrated. This week’s Gallup survey shows that only 30 percent of Americans have confidence in the Supreme Court, the lowest rating since the poll began in 1973. Respondents said the judges’ decisions are swayed by politics. Confidence in Congress also was an all-time low of 7 percent. In contrast, the military and the police got high marks, 74 percent and 53 percent, respectively. It is nothing other than a crisis of democracy if citizens overwhelming disapprove of civil institutions like the legislature, judiciary and executive branches while only trusting in the armed forces.

Americans are dispirited because there is no hope for improvement. John Dingell, who is 87 years old and has been a member of the House of Representatives for 60 years, believes the situation will not change until voters drive out all incumbent members. He says the art of compromise is disappearing, and politicians’ claim to represent voters is bogus. He argues that politicians are fanning discord by amplifying the voices of an extreme few.

America has assumed the role of policing the world under the guise of defending democracy. The crisis of America’s democracy can only increase skepticism of American moral authority. There also are pragmatic issues. On diplomatic affairs, the U.S. government has no unified voice and foreign policy could lose direction. America’s problem is not unfamiliar to Korea. If the United States can escape from its crisis of confidence, we will have a lot to learn from the example.