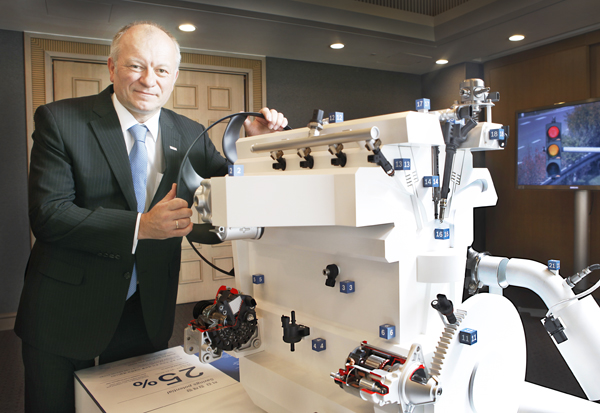 Robert Bosch Korea President and CEO Hermann Kaess admitted to being a bit tired when he was speaking at the company’s annual press briefing last month - not only because he spent the night before reviewing the announcement that Bosch will invest 62 billion won ($60 million) in the country this year, but also because he watched Germany beat Portugal, 4-0, in a World Cup match that ended at 3 a.m. Korea time.

Kaess is a fan of VfB Stuttgart in the Bundesliga and says he has gleaned some management insights from football.

“In big companies, some people just want to hide from others, but in football, you rely on each other and you can’t just escape because everybody watches you perform,” he said.

Prior to joining Bosch in 1989, the Achberg-born CEO was in the German army, where he jokes that he built a mentality strong enough to “survive” the Korean drinking culture. On a more serious note, he says his experience as an officer helped shape his leadership style.

“I learned to not just issue orders, even in the army,” he said. “Give people some background, explain the target to them.”

The 56-year-old stresses that Bosch, which started doing business in Korea in 1972, will strive to continuously contribute to the success of the Korean auto industry, while expressing concerns about government regulations and the labor environment.

Q. It’s been four years since you became the head of Robert Bosch Korea. What has been the most challenging here, compared to other countries?

A. I spent six years in London, where I saw differences in culture even though it is close to Germany. But of course, the culture here is very different. I was surprised that even though I know Japan and China quite well, Korean culture is very different than I was told. I think that is really one of the challenges for me. From a business perspective, I would say that until now, the high speed, flexibility and uncertainty in the market has been a challenge, whereas in Germany it is the other way around. Germans might be too analytic, too into strategic planning, but here you have to just go, do, execute very fast.

What was your impression of Korea before you arrived? Some foreigners say they don’t really have a clear image of the country.

I think in Germany we are more aware than others and seeing it with different eyes than others because we had East Germany and West Germany. Here you have South Korea and North Korea. There also is a special link between the two countries driven by the history of thousands of Korean nurses and miners coming to Germany in the past. Worldwide, Korea might be a country that isn’t well known. But when you are in the country, you see and experience so many special things. For instance, I found the food is absolutely fantastic and the people are very committed. I think the country is politically always in the headlines, but this North and South issue is too dominant in foreign countries.

Do you find Bosch Korea different from Bosch units in other countries? Did you try to change anything when you arrived?

As for corporate culture worldwide, I see quite a few similarities. Wherever our units are located, we have a very strong company culture. So whenever I go to other Bosch units, I feel at home. But then there is always a touch of the host country culture, which I enjoy very much. I would say Korea was a very well-organized operation when I arrived. I tried to be authentic and take all people very seriously, but there wasn’t really anything I needed to completely turn around. 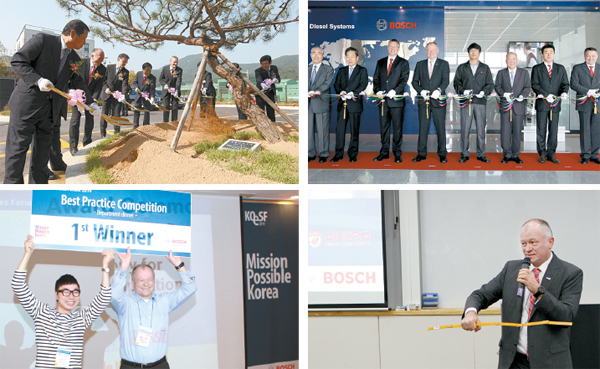 From left: Hermann Kaess plants a tree with other guests at the completion ceremony Oct. 15 for the Bosch Rexroth plant in Busan; Kaess cuts a ribbon to celebrate expansion of the Daejeon plant on June 4; Kaess holds the prize with Bosch employees after he won a practice contest at the company’s Korea OE Sales Forum in April; Kaess lectures Korea University students in December on the topic “The Game Has Changed, Own the Future.” Provided by the company

How do you rate Korean employees?

Koreans work very hard and that is the first thing I can easily say. I have worked in Germany and England, but what I like very much about Korea is that if you need people and they understand we have to fight and do something desperately, it is incredible how you can count on these people and what they can achieve in a short period of time.

What is Bosch’s business plan for diesel and electric cars?

The reality is that gasoline is still dominant in Korea. So we first need to have the right answers to reduce fuel consumption of gasoline cars. Diesels are, of course, a hot topic in Korea these days, and I’m also happy about that because we are a pioneer in this area. Diesel systems are complicated and require some cost, but we will see significantly more diesel sedans on Korean roads. As for electric, we believe this is for the future. We think even in 2020, environmentally friendly cars like hybrids, plug-ins and electric vehicles will not be more than 10 percent of all the cars in the world. From 2020 onward, their future will depend on battery cost. However, electric vehicles are an essential topic for us. I can’t disclose details of our future projects, but dozens of projects are under way for car electrification. We see that in cars of the future, 10 years and beyond, it will be autonomous, electrified and connected. Also, we see the Internet as a big part of the car of the future.

What do you think about Korea’s low-carbon cooperative fund, which gives subsidies to those who buy low-emission cars while taxing cars with higher emissions?

Probably the best way for such a system to work is to openly compete and just let consumers decide. But we are waiting for the final decision on this. Small cars will be promoted, of course, and it will make sense. We have seen other countries like France having this similar system and as a supplier, it is not easy as you can’t assume what consumers will do. How is it going to impact buyers in Korea? It’s really a big issue. But in Korea, I learned small cars are not that popular as people go for bigger cars. The good thing for us is that we have a wide range of possible solutions. Of course, we also can help carmakers to lower carbon emissions for bigger cars. We have the product and system to react.

What do you think about labor unions in Korea? What’s your take on ordinary wage issues here?

Coming from Germany where unions are strong, I think the cooperation model is a bit different. Unions there understand we should compete globally. We need to have a balance between profitability of the company and the demands of labor. Here it’s different and also new to me, because there are different situations in each entity, plant by plant. What I can say about the ordinary wage is that it’s not an easy topic for our company. Our salaries, if we compare them worldwide, are much more than in Turkey or Romania and even slightly more than in Western Europe. So it’s a difficult situation we are in. But, of course, I really want to see cooperation with the union and to discuss logically how to keep promises and jobs.

You studied mechanical engineering at the University of Munich. Many Korean students these days want to be doctors rather than engineers.

Of course, I would love to see more engineers. I have seen this trend in many countries, not only in Korea. In Germany, even if there’s still a high reputation, they don’t have enough engineers. Countries with a major production industry like Germany really must do what they can to attract young people to engineering. I really believe technology is necessary to solve all the problems. I know there are people who think technology is the basis of the problem, but I personally believe we need more technology. Korean people like new technology and innovative products. Interestingly, Germans always look at something and ask, “Is this risky or dangerous?” But Korean people just take it and do it. So the country itself is very well prepared in the industry we have here. Whose role is it to attract these young people to engineering? I think the whole society should step up. 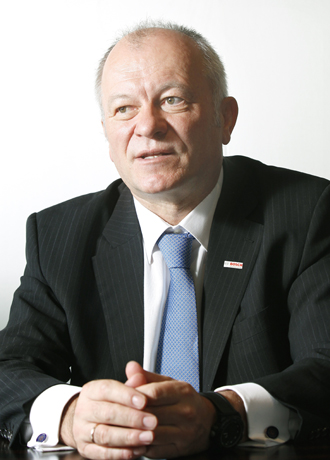