FKI surveys big business plans for rest of the year

FKI surveys big business plans for rest of the year 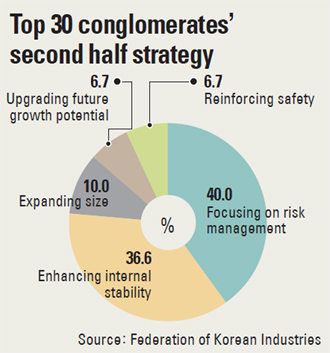 Korea’s top 30 conglomerates will focus on risk management and internal stability in the second half rather than on expansion, according to a survey by the Federation of Korean Industries (FKI) released yesterday.

According to the FKI, a big-business lobbying group, 12 chaebol, or 40 percent of the top 30 conglomerates, said they will concentrate on managing risks such as foreign exchange rates.

Eleven conglomerates, or 36.6 percent, said they will prioritize stability in management, with some planning business restructuring.

Only 10 percent of the polled groups said they are most interested in becoming larger and expanding their market shares during the remainder of the year, while 6.7 percent plan to reinforce growth potential and safety.

When asked about the second-half economic environment, 20 chaebol saw it as similar to the first half of the year. Six said it will improve and four expected it to worsen.

When asked about the problems they are facing, 26.7 percent cited lower profits, 23.3 percent slumping domestic consumption and 13.3 percent difficulties with exports. Rising production costs, tightening government regulations and fierce competition were each mentioned by 10 percent.

Regarding investment, only two of the 30 groups said they will expand investment from their original plans, with four expecting to cut back.

The remaining 26 chaebol said their investment plans will remain unchanged.

The FKI survey showed that a recovery in the domestic market will be the most important economic factor influencing investment in the second half of the year.

Fourteen conglomerates answered that revival of the domestic economy and deregulation should be the government’s policy priorities to stimulate corporate investment.

For non-economic factors, 30 percent of conglomerates identified delays in investment-related legislation as the issue that would most influence second-half investment decisions, while 13.3 percent of them cited the hostile social atmosphere toward large corporations.

“We should focus on the fact that economic research institutions are lowering their estimates for Korea’s growth rate because both inside and outside economic conditions are not good,” said Song Won-geun, FKI’s economic research division chief. “Active policy to revitalize the domestic economy and deregulation should be pushed in order to boost business activities.”

The institute cited sluggish consumption after the Sewol ferry tragedy and the effect of the strong won on exports.