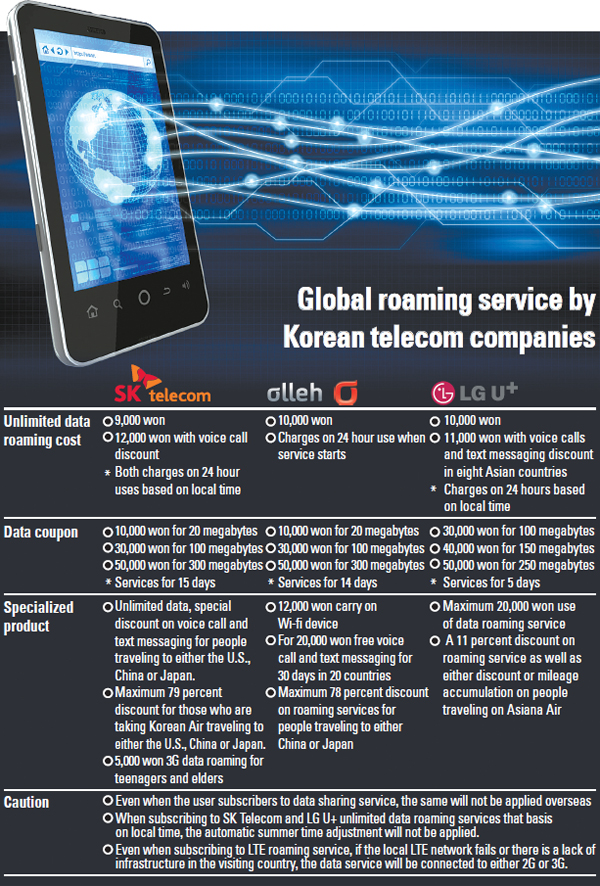 A 40-year-old research institute analyst, who wished to be identified only by his family name Sohn, has been making frequent overseas trips for nearly five years.

He travels to Japan and China for his work, and enjoys visiting Europe.

“In the past, I would just shut off my phone because the data roaming service was so costly,” Sohn says. “But today I use SK Telecom’s unlimited data roaming package, which is less of a financial burden. Thanks to the service, I have no trouble finding popular restaurants using my Google Maps or communicating with locals using my Google translation and even uploading pictures and videos from the trip on my Facebook page right there and then without having to worry what my phone bill will be like at the end of the month. All I need to pay is 9,000 won ($8.92) per day.”

As the summer vacation season approaches, the nation’s mobile carriers are competing to attract customers with overseas data roaming.

Especially, thanks to the appreciation of the won, which closed at 1,008.9 won against the U.S. greenback, more people are expected to spend their vacation abroad.

Data roaming has become an important service for the carriers as more people communicate through mobile social network services like Facebook and Kakao Talk.

SK Telecom said that in May, when there was a long holiday break starting with Labor Day on a Thursday, followed by Children’s Day on Monday and Buddha’s Birthday on Tuesday, many Koreans took the opportunity to travel abroad.

During that period of time compared to the same period last year, voice roaming calls increased 22 percent. Data roaming saw a much sharper increase of 100 percent.

Hoping to attract more customers, the mobile service carriers have been diversifying data roaming service products so customers can choose according to their preference.

Of course, with today’s smartphones, when the user does not turn off the data services, the mobile device automatically connects to roaming services. In this case, the disadvantage is that the user unwittingly uses expensive services and runs up high bills.

However, the details of the most basic service are different for each company.

For those who will be traveling for an extended period, it is advisable to buy a data package instead of signing up for a daily payment service. When paying 10,000 won to 50,000 won, the smartphone user can have access to a minimum of 20 megabytes to 300 megabytes of data roaming.

Once the data is used up, the service ends.

The mobile carriers today have even released products that offer discounts according to the country visited.

Some of these products cost less than 30,000 won for unlimited access to the Internet along with discounts on voice calls and text messaging. These products are mostly centered on people traveling to the United States, China and Japan.

KT offers a maximum 78 percent discount on voice calls made from either China or Japan, which rounds up to 500 won per minute.

LG U+ since April has been offering discounts on data roaming charges in eight Asian countries, including China, Japan and the Philippines.

SK Telecom and LG U+ have collaborated with airlines regarding their data roaming services.

But when using such services, consumers need to be cautious.

A 45-year-old office worker who wished to be identified only as Shim took a business trip to Europe at the end of May. However, he was charged an extra day of data roaming services because of the summer time adjustment.

Starting in March, much of the United States and Europe move their clocks ahead one hour. The local data roaming service didn’t adjust for the time change.

“I was billed for the whole day when I used [the roaming service] for only an hour,” Shim said.

Additionally, subscribers who signed up for data sharing services that allow the data to be used among different mobile devices, will be unable to receive the service overseas.

Lately, local mobile carriers are prioritizing cooperation with overseas mobile carriers since data roaming services are only possible through the network infrastructure of overseas partners.

Only when the overseas partner has a strong and stable mobile infrastructure will it be able to provide high-quality Internet access to customers.

Additionally, a growing number of Chinese customers are becoming a new revenue source for local companies. Last year, nearly 1.3 million Chinese visitors came to Korea. The roaming services the Chinese are subscribing to through Chinese mobile carriers have been growing 20 percent to 30 percent annually.

This is strengthening business ties between Korean and Chinese mobile telecommunications carriers.