Experts weigh in on outcome of Park-Xi summit

Experts weigh in on outcome of Park-Xi summit 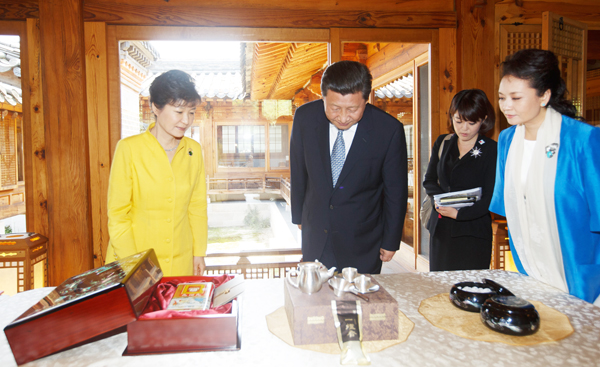 Chinese President Xi Jinping concluded his two-day summit to Seoul on Friday, during which China directed its “charm offensive” toward Korea.

Xi was accompanied on his state visit by first lady Peng Liyuan, who graced the media spotlight with her brand of soft diplomacy. The economic advancements and concessions made on Beijing’s part also point to a different sort of diplomatic strategy than has been previously used by China.

Two Korean experts offered their evaluations of Xi and President Park Geun-hye’s joint communique, particularly on its advancements in the message they wish to send on North Korean denuclearization, economic relations and other bilateral issues.

While there was anticipation of a stronger message on North Korea’s nuclear program from the two governments, they point out that some progress was still made on China’s position on the issue.

The joint communique signed on Thursday by the two leaders reiterated their “firm opposition to the development of nuclear weapons on the Korean Peninsula.”

North Korea and international security expert Yun Duk-min, chancellor of the Korea National Diplomatic Academy, said that the “firm opposition” referenced in the joint statement “includes the principle of the disuse of North Korean nuclear weapons. It is a big change to mention a condition for the [resumption of] six-party talks.”

“President Xi not meeting with North Korean leader Kim Jong-un and coming to South Korea was a warning message,” he added. “A precondition to a North Korea-China summit can be presumed to be [Pyongyang] refraining from conducting a fourth nuclear test or showing sincerity in resolving the nuclear issue. Because such a condition was not met, [Xi] came to Seoul.”

Kim Heung-gyu, a diplomacy studies professor at Ajou University, was more critical of the progress made. “China has come to a new understanding of what a big threat North Korea’s nuclear program will be” since the start of the Xi Jinping administration last year, he pointed out, explaining the reasoning behind the wording “firm opposition.”

He added that South Korea’s “strategic value is increasingly important” as China’s relations with neighboring countries are not operating smoothly because of its rising militarism.

Kim added that it is regrettable that at a time when relations between North Korea and China are rocky due to differences in opinions and South Korea is enjoying strategic leverage, talks on a method to restrain Pyongyang’s development of intercontinental ballistic missiles (ICBM) are not under way.

The two experts also spoke on Seoul and Beijing’s response to the Japanese government’s historical revisionism. The two sides tread carefully, however, not calling out Japan or historical issues in their joint statement.

“The concern in regard to Japan’s exercising its right to collective self-defense is not a legal matter, but one concerning Prime Minister Shinzo Abe’s regressive historical position,” Yun said. “Even if Korea and China join together in reprimanding Japan, it would only provoke more resistance from Japan internally. It is not appropriate for Korea and China to join one side and pressure Japan.”

“The United States is using China’s uncertainty to keep it in check, through the South Korea-U.S.-Japan alliance,” Kim said.

“China made awkward propositions in regard to Japan that we would have to pay the price for, but we were able to avoid [that situation] by reaching a mutual understanding,” he added in the China-Korea summit.

Nonetheless, he said, leaked portions of the two leaders’ talks on Japan revealed both “our governments’ delicate and lacking areas.”

Perhaps the most progress made in the bilateral presidential summit, however, was in economic development, Yun concluded. “You could see the closeness and hidden potential of Korea and China’s economic relations through the activities of the large-scale business delegation the accompanied President Xi,” he said.