Networking is key to defector getting ahead

Networking is key to defector getting ahead 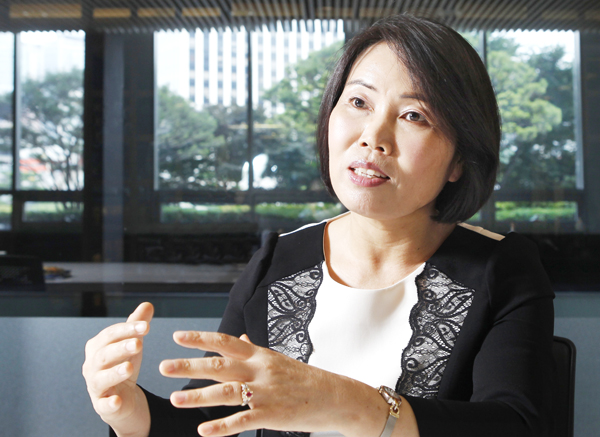 Kim Young-hui, a North Korean defector and the Head of the North Korea Economic Research Department at the Korea Finance Corporation, speaks about her family39s journey to South Korea and how she and her husband overcome their difficulties in getting white-collar jobs. By Park Sang-moon

When Kim Young-hui fled North Korea for the South in 2002 with her husband and two sons, she wasn’t prepared for the downward mobility that was about to hit them.

Kim had a bachelor’s degree in accounting from North Korea’s prestigious Wonsan University of Economics and left a job as an accountant at a ruling party-controlled factory.

Her husband Kim Byeong-uk had been a civil servant at a state-run organization connected with the arms industry in Nampo city, a port city near Pyongyang.

After going through the compulsory 12-week orientation at the Hanawon resettlement center, Kim starting looking for a job in the capitalist South. The only thing she could find was a job working as a salesperson at a Carrefour store in Seoul, with a daily wage of 4,500 won ($4.4). It was a 12-hour a day job.

She was doing better than her husband. He ended up working part-time at a gas station.

Kim and her husband felt they were totally unprepared for the South, despite educations and a level of success in the North. That was a non-transferable currency, and they realized they would have to truly start from scratch.

“Even though I had a bachelor’s degree in economics, and mainly majored in accounting, it was not easy for me to settle down,” she said. “I could not use anything I learned in North Korea. I had to start everything from the very beginning and find a totally new job here.”

Then she got a job as a secretary at an automobile repair shop, which was a big step up. She did some accounting but mainly dealt with phone calls from customers. The job was white collar and her wage was doubled.

But after a few weeks, she found that she was unsuited to that job.

“Some customers complained to my boss that I spoke with the accent of ethnic Koreans living in China,” she said. “I also struggled with South Korean customers because I didn’t understand the names of some foreign cars.

“Three months after I started the job, I was fired,” she said. “I was so frustrated.”

But Kim and her husband were about to stumble into a piece of luck. The trickle of defectors from North to South Korea became more of a river, and then a flood, following the disastrous floods and famines of the 1990s, which Pyongyang refers to as the Arduous March period.

But among the defectors, not many were from the educated elite and almost none had degrees in economics.

“I was invited by many government organizations and civic groups to give lectures on North Korean affairs,” Kim recalls. “And when I gave these lectures, I got chances to meet with South Korean officials and other elites and learn the culture and manner of the upper class of South Korea.”

Kim volunteered to do work at an NGO called the Organization for One Korea, founded by a former high-profile Grand National Party lawmaker, Hong Sa-duk.

She counseled defectors who were having difficulties settling into their new lives. And although she was only given money for commuting and lunch, she received something much more valuable: the chance to network with high-profile South Koreans who were interested in defectors and unification issues.

In 2004, she entered Kyungnam University, located in Changwon, South Gyeongsang, through a special admission policy that accepted three North Korean defectors as students. One of the other three defectors admitted was her husband. They both got full scholarships for almost for two years, and each earned master’s degrees in North Korean studies.

“When I came to the South, I never thought of going back to school,” Kim says. “I just assumed I should start to work to survive. Had I not meet those high-profile South Koreans at the NGO, I would never have thought about studying at a university.”

The different style of South Korean lectures was never easy for her.

“I found them really baffling,” she says. “I could not understand all of the English terms, such as paradigm and mechanism and so on. So I bought a tape recorder and recorded all of the lectures to listen to and study again at home.”

Months before she got her master’s degree in the summer of 2006, Kim’s networking friends advised her to apply to the state-controlled Korea Development Bank, which is such a coveted place to work for South Koreans that it has the nickname “God’s workplace.”

For the first time, the bank was looking for a North Korean defector specializing in North Korean economics to manage research for the bank. “It was not an officially-released job notice,” she said. “The bank sent the notice only to the National Intelligence Service, the Ministry of Unification, and other government organizations and asked them to recommend someone qualified for the job. Officials who knew me called and told me to apply for it.”

In fact, about 40 defectors applied for the post. But none had a Bachelor’s degree in economics from the North and a Masters from the South.

“During the interview, I told the KDB officials that I didn’t even know the bank was a really good workplace, and I said I appreciated a job being offered to North Korean defectors,” she said. “I told them that if every South Korean company hired just one defector each, it would make a huge difference for North Korean defectors.”

Kim admits that defectors do need special treatment to get ahead in the South Korean workplace.

“I could get the job at the KDB because it was a competition among defectors,” she says. “If there were South Korean applicants, it would have been totally impossible for defectors to compete against them.”

Kim still works on a yearly contract rather than as a full staff member, but has survived for eight years, even when her team was separated from the KDB in 2010 and transferred to the Korea Finance Corporation, another state-run company. She has now been promoted to head of the North Korea Economic Research Department of the KFC.

“I really appreciate the KDB and the KFC,” she says. “I always think if I do not perform my best here, it will sully the reputation of the entire defectors’ society in South Korea.”

While working at the KDB, she also earned a doctorate in North Korean studies at Dongguk University. Her husband, who worked as a researcher at the Institute for East Asian Studies at Kyungnam University and an advisory at the state-run National Unification Advisory Council., did too. They are the first North Korean defector couple to have earned twin doctorates in the South. Husband Kim, 51, is currently working as a lecturer at the Dongguk University.

“Many South Koreans say North Korean defectors do not take responsibility for their work,” says Kim, 49. “But that is a prejudice based on a lack of understanding of how things work in the North. In the Communist regime, we were always ordered to complete a certain amount of work within a set period of time, with a deadline.

“North Koreans never do things on their own if their boss did not order them to do them,” she says. “That’s because in the Communist society, we never knew what the boss wants. But it also means that if you order a North Korean to do something, he or she will do everything you order. For me, obeying an order from a South Korean boss was not difficult. North Korea has a much stricter hierarchy in the workplace than South Korea.”

Defectors have their own unique potential, Kim says.

“Most of them have become strong after going through the dangerous journey defecting to the South,” she says. “If you train them for just three or four months, they will adjust to the work because they are really persistent and eager to make it.”