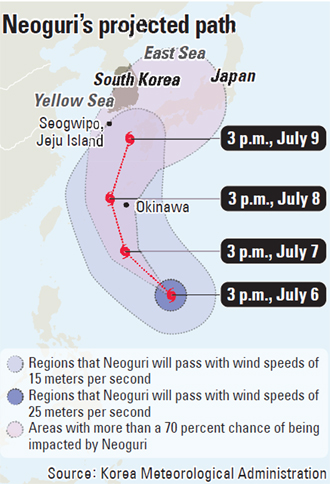 Typhoon Neoguri, the second typhoon of this year’s tropical cyclone season, is rapidly intensifying and will affect southern parts of Korea as well as Japan this week as it moves northwest over the Western Pacific, the Korea Metrological Administration said.

The typhoon, which was churning toward Okinawa, Japan, yesterday, is expected to take a northern trajectory and hit Jeju Island and Korea’s southern reaches from Wednesday through Thursday, according to the weather agency.

Neoguri yesterday sustained winds of about 169 kilometers per hour (105 miles per hour) as of 3p.m., the agency added, rating the wind “very strong.”

The storm has rapidly intensified since its formation on Friday into the strongest tropical cyclone this year in the Western Pacific basin.

The season’s first typhoon, Faxai, reached maximum typhoon status in early March, though it did not make landfall. In the Atlantic Ocean and eastern and central Pacific, tropical cyclones with winds faster than 33 meters per second are classified as hurricanes.

The Joint Typhoon Warning Center has upped its forecast wind speeds for Neoguri to the equivalent of a Category 5 on the Saffir-Simpson Hurricane Wind Scale. Tropical cyclones are referred to as typhoons in the Western Pacific and hurricanes in the Atlantic Ocean and Gulf of Mexico.

The Saffir-Simpson Hurricane Wind Scale is a one to five rating based on a hurricane’s sustained wind speed, with five being the most powerful. This scale is used as a predictor of potential property damage, with level five capable of inflicting “catastrophic damage” on people and property.

Neoguri will continue to gain strength into early this week and reach its peak on Wednesday, the Korea Meteorological Administration forecasted. It is expected to weaken afterward.

Off Korea’s southwestern coast, the search for those still missing in the April 16 Sewol ferry disaster was put on hold Saturday due to expected strong winds and rain across the area.

Eleven people remain missing from the deadly sinking, which resulted in the deaths of 293 people. The search has been slow in recent days, with the latest recovery on June 24.