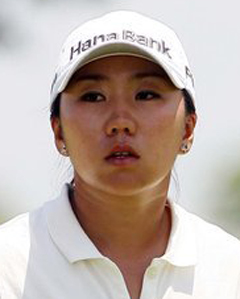 Kim In-kyung, or I. K. Kim, of Korea won the Ladies European Masters on Sunday, closing with a 3-under 68 for a five-stroke victory in the final event before the Women’s British Open.

Kim had an 18-under 270 total at Buckinghamshire for her first victory since the LPGA Tour’s 2010 Lorena Ochoa Invitational. She opened with rounds of 68, 63 and 68.

“I just had a great time,’’ Kim said. “It’s great to win the tournament and this is my first time playing the course so I’m really honored to win the championship. I feel like I’ve been hitting the ball really well and putting really well, so I just had to go out there and enjoy myself.’’

Australia’s Nikki Campbell was second after a 67.

Northern Ireland’s Stephanie Meadow tied for third at 11 under with South Africa’s Lee-Anne Pace and Germany’s Caroline Masson. Meadow matched the course record with a 63, Pace shot 68, and Masson 69.

Meanwhile, Graeme McDowell of Northern Ireland came from eight shots back to retain his French Open title Sunday, shooting a 4-under 67 in pouring rain to win by one stroke.

McDowell made the best of the tough conditions, making five birdies and a bogey for the lowest round of the day to finish with a 5-under 279 total.

“That goes back to my upbringing a little bit in my teens, playing through all weathers and conditions,’’ McDowell said. “Playing golf in bad weather is an art form. Some guys are good at it, some guys are not.’’

Overnight leader Kevin Stadler managed only a 76 to share second place with Thongchai Jaidee, who carded a 72. Stadler still had a chance to win it on the last hole, but he missed a long birdie putt. He then failed to even force a playoff when he missed a three-footer for par.

“I think it’s very hard to lose the same tournament twice on the same day and I managed to do it,’’ Stadler said.

McDowell had seven top-10 finishes this year on the European Tour and PGA Tour before entering this tournament.

“I’ve pretty much thought of myself a decent bad weather golfer, until the last five years,’’ McDowell said. “I feel like I’m spending a little bit too much time in America. I’m a little bit soft, and I needed that type of a day.’’

Stadler went into the final round with a four-shot lead over Thongchai and Victor Riu.

He put himself in trouble by missing short par putts on No. 4 and No. 6. He then double-bogeyed No. 7 by hooking his tee shot into the rough before missing the fairway with his second shot.

Another errant tee shot from Stadler on No. 8 gave Riu a share of the lead.

“It was absolutely miserable,’’ Stadler said about the weather. “We don’t play in that stuff in the States.’’