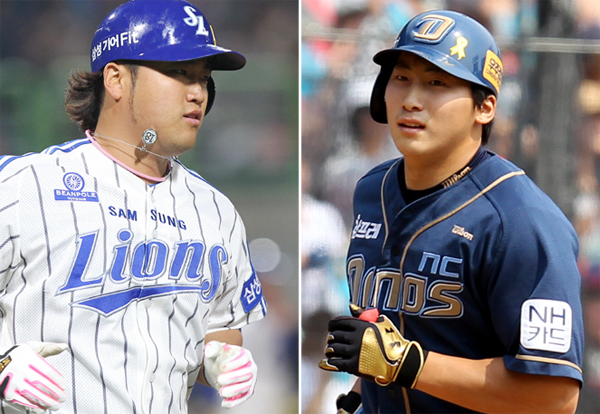 The KBO yesterday announced the 22 players on the Eastern and Western squads for this year’s All-Star Game on July 18 at Gwangju-Kia Champions Field. Na, who will play for the Western team that represents the LG Twins, Nexen Heroes, Dinos, Kia Tigers and Hanwha Eagles, earned 57.92 points, the most of any player. The second-most popular player in the league was Heroes shortstop Kang Jung-ho, who was only 0.11 points behind Na.

The point total is derived from votes by fans (70 percent) and players and coaching staffs (30 percent). About 1.78 million votes were cast from June 10 to Friday.

“Well, I think I should I say I’m very surprised and happy,” Na said. “As you know, this is only my second season in the KBO and I’m happy to feel like I have done something good for the fans. I will try to play my best on the field in Gwangju.”

The 24-year-old made his KBO debut last season with the Dinos and hit .243 with 14 home runs and 64 RBIs. This year has been a breakout season so far for Na, who is batting .348 with 18 home runs and 62 RBIs and is a big part of the reason why the second-year Dinos were in third place (42-31) as of Sunday. “I think it will be a great experience for me to be in the All-Star Game,” said Na, “and I will do everything I can to help my team make it to the postseason.” 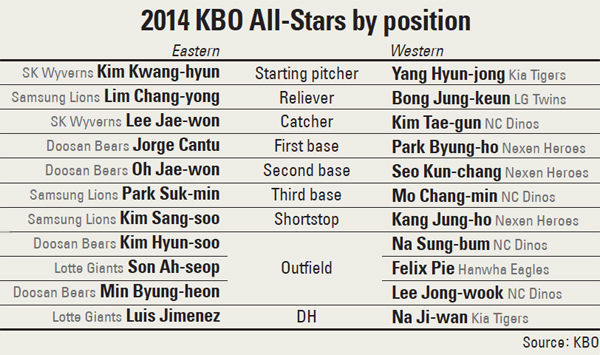 The Western team’s starter will be Tigers lefty Yang Hyun-jong, who became Kia’s ace after some tough years due to injuries. Yang is 10-4 with an ERA of 3.67 and a favorite to be a member of the 2014 Incheon Asian Games national team in September. Bong Jung-keun, the closer for the LG Twins (0-3/16 saves/3.38 ERA), was named best reliever.

Heroes star shortstop Kang, the runner-up to Na with 57.81 points, is expected to go to either Nippon Professional Baseball or Major League Baseball after the season. The 27-year-old is hitting .336 with 24 home runs and 66 RBIs.

For the Eastern team, Wyverns lefty ace Kim Kwang-hyun will likely start after he was named the most popular starting pitcher with 39.72 points, beating Jang Won-sam of the Lions by .61 points. Kim also is expected to be on the Asian Games roster and possibly move to a foreign league. Kim is 7-6 with a 3.79 ERA. “I hope I can give some nice memories to the fans before I go to a foreign league,” he said.

Ryu Joong-il of the Lions will manage the Eastern team and Yang Sang-moon of the Twins will lead the Western squad.

Along with the 22 leading vote-getters, each team will add 12 players recommended by each team’s manager to complete their 23-man rosters. The final rosters will be announced by the KBO tomorrow.