Democracy according to Abe

Democracy according to Abe 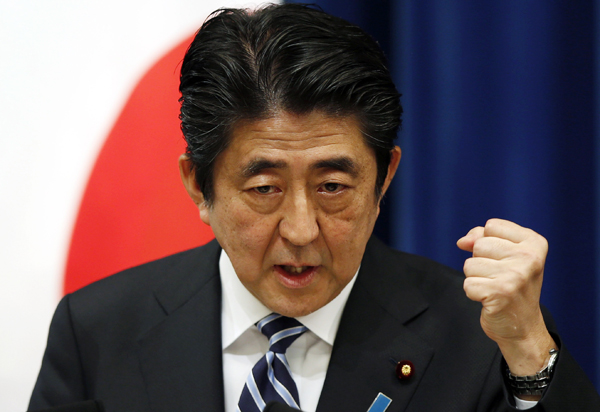 Sunday shoppers in Tokyo could be forgiven for wondering if they had been transported to Tibet or Myanmar as a man climbed atop a pedestrian crosswalk, voiced his reason to the crowd via megaphone and set himself ablaze.

Self-immolation as political protest is almost unheard of in developed nations. The middle-aged man, identified only by the family name Yamashiro, said igniting himself was the only way to show Prime Minister Shinzo Abe his anger at a plan that some see as violating the spirit Japan’s pacifist Constitution.

While extreme, Yamashiro’s fury isn’t uncommon. One day later, thousands demonstrated outside Abe’s residence against this “reinterpretation” of a Constitution that he lacks the votes to amend. The public opposition didn’t stop Abe’s Cabinet from rubber-stamping his semantic end run around the law, which raises a vital question: Will Japan’s democracy survive Abe?

For the third time since taking office in December 2012, Abe did exactly what all too many of his 126 million people oppose. Earlier, he rushed into law a controversial secrecy bill that could send reporters and whisteblowers to jail on varied and ambiguous grounds, and he pushed to restart reactors shut on safety grounds after the March 2011 Fukushima disaster. Given a mandate to end deflation, Abe’s biggest moves to date involve flexing geopolitical muscles, not building economic ones.

“He has ignored popular will and made a mockery of constitutional and democratic principles on all three fronts,” says Jeff Kingston, head of Asia studies at the Tokyo campus of Temple University. “The alleged success of Abenomics has stoked his popularity and given him an opportunity to overturn Japan’s postwar order.”

Banri Kaieda, head of the opposition Democratic Party of Japan, bemoans Abe’s “authoritarian tendencies” that have nothing to do with raising living standards or restoring growth. In an April speech in Washington, Kaieda warned that the “Abe administration could move beyond the realm of healthy nationalism and become a destabilizing factor in East Asia.”

China would argue that Abe crossed that line with his December 2013 visit to Tokyo’s Yasukuni Shrine, where 14 Class-A war criminals are interred. But this latest move to enable Japan to deploy troops overseas, ostensibly to defend its allies, is sending shockwaves through the region, particular victims of Tokyo’s World War II militarism, China and South Korea.

Japan has every right to defend itself. It’s been a good global citizen since 1945 and deserves a permanent seat on the UN Security Council. If its people support a change in the pacifist Article 9 of the postwar Constitution, then so be it. But Abe should hold a national referendum on the issue, and lawmakers in his Liberal Democratic Party shouldn’t give him carte blanche to pretend Japanese law allows what it forbids.

“It’s an awful precedent, of course,” says Colin Jones, a legal scholar at Doshisha Law School in Kyoto. “If the Cabinet can reinterpret this part of the Constitution, why not others?” Adds Kingston: “Abe is like a thief in the night sneaking in the backdoor to steal the heart and soul of Japan’s Constitution and that’s why he has provoked such a strong backlash and anger - because Article 9 is a touchstone of national identity.”

Japanese housewife Naomi Takusu even nominated Article 9 for a Nobel Peace Prize. It will be fascinating to see if the Nobel committee calls Abe’s bluff come October.

Turning Japan’s nuclear reactors back on also should be decided by referendum. Although the science tells us nuclear power is cheap, safe and clean, Fukushima demonstrates the risks of running almost 50 reactors in one of the world’s most seismically active regions. Also, the Nuclear Regulatory Agency both regulates an industry with immense political influence and promotes it. Nuclear-technology exports are an Abe priority. But Japan has far more to gain from inventing and commercializing alternatives to nuclear power than exporting the technology to developing nations such as Turkey and Indonesia, both of which are prone to earthquakes.

Where’s the outrage as Abe defies his people? Many Japanese are so happy to have a leader who’s acting boldly that they seem willing to give him the benefit of the doubt. Also, much of the media are in the bag. Companies such as Tokyo Electric Power Company, whose incompetence gave us Fukushima, are huge advertisers. Japan’s press system covets access over all else, so docility reigns. Along with the secrecy law, Abe stacked the board of national broadcaster NHK with like-minded conservatives. NHK, it’s worth adding, barely covered Sunday’s suicide attempt in Shinjuku. Is it because it didn’t fit with the Abe narrative?

In an open society, epochal changes should involve the people. In the years ahead, the self-immolation that historians study may be Japan’s democracy.