Actor Ahn Sung-ki, second from right sitting at the table, talks inside Myeongdong Cathedral yesterday about the music video made by 36 local stars to mark Pope Francis’s visit to Korea next month. [NEWS1]

Prior to Pope Francis’s visit to Korea next month, 36 local celebrities have released a video that shows them recording a song to celebrate the occasion.

Many Catholic entertainers - including actor Ahn Sung-ki of the recent film “The Divine Move,” actress Kim Tae-hee of the SBS drama “Jang Ok Jung” and actor Kim Woo-bin of the SBS series “The Heirs” - were shot singing either in a recording studio or at Myeongdong Cathedral in central Seoul.

“It was a blessing that so many of us worked around our schedule and found time to be with each other,” said actor Ahn Sung-ki at a press conference yesterday at Myeongdong Cathedral.

Upon releasing the film to the public, Ahn and producer Won Dong-yeon of Realize Pictures sat down to share their experiences filming the video.

“In some ways, it was the easiest work I’ve ever done with celebrities because everyone didn’t mind a delay in filming or staying until late at night to finish filming,” said Won.

Singer-songwriter Roh Young-shim wrote the song “Koinonia,” which the celebrities sing in the video. 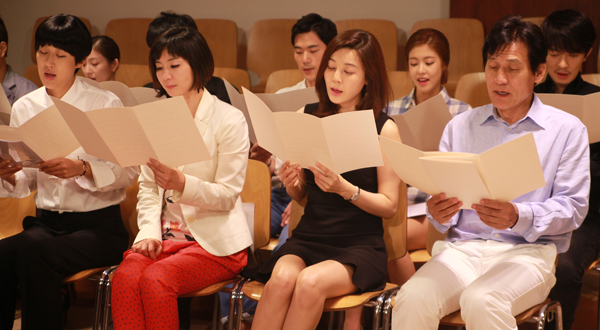 Actress Kim Ha-neul, second from right, sings a song with other local stars. Provided by the Preparatory Committee for the Visitation of the Holy Father

“I wanted the song to be like a bundle of flowers given to the pope,” Roh said, adding that she named the song after a Greek word that means community, friendship and communication.

“This word could work as a spell we keep on reiterating, even when we don’t know the exact meaning, so that having such [elements] becomes harmonious in real life.”

As Korea is the first Asian destination for the pope since his inauguration in March last year, local clerks are putting in efforts to turn the visit into a peace offering to people who are suffering for various reasons.

“We have prepared the promotional video in the hopes that it goes beyond the scope of religion and brings some joy to the entire Korean society,” said priest Park Gyu-heum.

“We hope our efforts become a consolation and a joy to many.”

As the celebrities and the production staff made the video voluntarily, without payment, the proceeds from distribution will go to people in need.

The video will be released through an official website with information about the pope’s visit to Korea, ppoekorea.catholic.or.kr, or through major music providers and YouTube.

The song, which debuted yesterday, will be shown in many different versions in the coming days with various singers, including one from globally renowned soprano Im Sun-hae.

Meanwhile, a team from the Vatican is busy trying to organize the pope’s itinerary. They came to Seoul yesterday for a three-day stay and are visiting Myeongdong Cathedral, Gwanghwamun, Haemi Martyrdom Holy Ground in Daejeon and the social welfare facility Kkottongnae (Flower Village) in Cheongju.

They are also confirming details regarding a Mass the pope will give during his visit here.