The interior of the Home and Tones building, a DIY store owned by Samhwa Paints, a well-known local paint company, in Daechi-dong, southern Seoul. [JoongAng Ilbo]

While interior design hasn’t been high up on the agenda for Koreans before now, more people are showing an interest in decorating their homes, according to local company Samwha Paints.

If you happen to pass through Daechi-dong, southern Seoul, you’ll spot Home and Tones, the company’s flagship store, a white three-story building with floor-to-ceiling windows.

The very minimalist structure looks like an art gallery or a fancy clothing shop, rather than a do-it-yourself (DIY) store specializing in colorful paint for the home.

The flagship, which is the first of its kind for a paint company here, was launched last year as Samhwa wanted to give more options to local customers for better home decoration in a landscape where options are lacking.

“More attention is falling on interior design as people have come to consider it as part of lifestyle choice,” said Heo Sung, the CEO of Samhwa Paint.

“Now people have started to open their wallets to make themselves content with their lives rather than to make others jealous.”

For customers who simply don’t know where to start with renovations, the store helps them envision what it’s like to use bolder colors in the home.

“Due to the stereotypical idea that white colors makes spaces look larger, Korean people are a bit behind in choosing colored paints and are also afraid of using color,” Heo said.

Home and Tones, which is filled to the brim with colorful objects, leads consumers into a new world where they can communicate directly with paint suppliers instead of through middle men such as construction companies or designers.

A house of color

The first floor of the Samwha store is dedicated to different hues.

One wall is designed as a color palette featuring different shades of purple that bleed into a dark blue. When the sliding wall is moved, another wall with different color samples pops out. Another is used as a gallery to display colorful paintings by popular local artists. The artwork, however, has all been created with wall paint rather than the typical watercolors or oils. 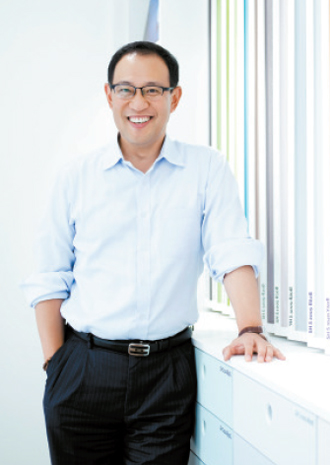 To minimize the gap between the raw paint on the one wall and the artwork on the other, the company has placed everyday accessories in between to contrast with the shades on the palettes and the paintings. The company explains that these items are there to show how various colorful items can be mixed and matched.

It’s hard to resist the idea of painting your home after spending some time in the store, which is surely part of the reason why the company wanted visitors to experience how color can change an entire atmosphere.

In-house interior consultants are ready to jump in and assist anyone with questions to help them find the most suitable color for their house.

In fact, it might be challenging to choose just one out of the almost 1,000 paint shades available. As a result, designers are on hand to sit down and talk to consumers to suggest the colors that may work well for them.

During sessions up to an hour long, consultants ask questions such as what kind of furniture customers have at home, whether or not they have any children, and what their daily routine is like.

Color experts can also run a simulation to show what consumers’ homes could look like after just one wall of a room changes color. People who are reluctant to choose any color other than white tend to change their minds after seeing the simulation, according to Heo.

“There are also some people who take a much bolder step and decide to paint different colors in each room,” he said.

Samwha also offers a painting service, but Home and Tones usually asks customers whether or not they want to do the work themselves. As painting an entire home is troublesome, the company suggests starting with just one room. Painting a wall is collaborative work, the company says, and is an experience that can give families some quality time to spend together. 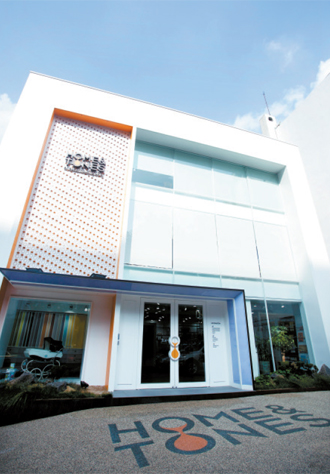 The facade of Home and Tones, a paint store operated by Samhwa Paints.

“Painting is one of the major family events in overseas countries,” said Heo. “It is part of culture and also an opportunity for education.”

Heo, who spent 30 years living in Canada, expects that Korea will soon develop a “do-it-yourself,” or “DIY,” culture as labor costs are getting higher and higher.

“In many developed countries where labor costs are rising, DIY culture is already widespread,” Heo said.

“On top of that, as people value their individual tastes more than ever, instead of asking to ‘have it done’ they simply ‘do it themselves’ these days.”

For those who have never painted outside of art at school, the company has prepared classes. The program includes four sessions that are three hours long. Although the focus is to have participants learn how to cleanly paint walls, some programs offer the chance to decorate small interior items.In the basic class, participants begin by painting a wooden item such as a plate, photo frame or bookends to get used to the thickness of the paint and how to apply clean brush strokes. They can then move on to create patterns using different colors.

Each class has either 18 or 10 students, and around 60 people can take it for free each month. The company accepts applications for classes toward the end of each month on a first-come, first-served basis, and classes sometimes get filled within 30 minutes of opening for registration.

The classes are offered on the second floor of the building. The classroom is equipped with all the supplies that are necessary for painting, including aprons, arm covers, gloves and paint dryers.

The materials are provided by the company so that participants can come empty-handed.

The company has also opened a cafe area where free coffee is served, enabling participants to chat with one another and share other tips on lifestyle trends.

Statues mimicking people painting in the far left photo are set near the entrance to the building of Samhwa Paints in Daechi-dong, southern Seoul. On the second floor of the building, the bathrooms pictured in the middle are painted with purple and blue to show visitors that choosing a bold color for their walls at home can also work well as part of interior design. The far right photo shows the classroom where the company offers a painting class. [JoongAng Ilbo]

What could be the main reason for a company to invest in an experience center in the center of southern Seoul, where real estate is so expensive? Why would a company offer free consultations on home styling and even host free painting class?

Heo explains that it is to give consumers a chance to see a bigger picture of the interior industry.

“Until now, in the paint market, communication or trade between the paint maker and actual users were rare due to structural reasons,” he said, adding that a middle man, usually a construction company, took charge of choosing the right color and shade for their consumers.

To Heo, the limited consumer interaction was something that needed to be addressed.

“Companies like us, which make a premium product, need an outlet to reach out to individuals who would actually live in the house [painted with our products] to know what their options are and to be given a chance to voice up for what they want.”

Until now, the premium paint market has been dominated by foreign-made paint. As the company developed a high-end product named “The Classy,” it wanted an outlet to promote the fact there is a local label to choose from among a market filled with foreign paint.

Considering that many children and adults with sensitive skin have difficulties with toxic smells or elements from paint, the company also sought out certification from the local and U.S. governments to prove that its product doesn’t exacerbate skin conditions for those suffering with atopic allergies. It doesn’t use chemicals such as formaldehyde or heavy metals, which are acknowledged as causes of skin irritation.

Families with babies or younger children may worry that their newly painted walls won’t shine for too long as the kids may scribble on them.

For those customers, the company created sketch paint, which works like a whiteboard so that drawings on the wall can simply be removed with a chalk eraser.

An entire wall can be a sketchbook for the young ones to show off their creativity and artistic talents, while parents won’t need to stress out about the children ruining their decor. There are 51 color options to choose from in the sketch collection, so the entire wall can be a redboard or a greenboard instead of just a simple whiteboard.

“We will get to know what’s missing from the product after you actually try it out,” said Heo.

“And that experience will become the source of inspiration to make a better product.”