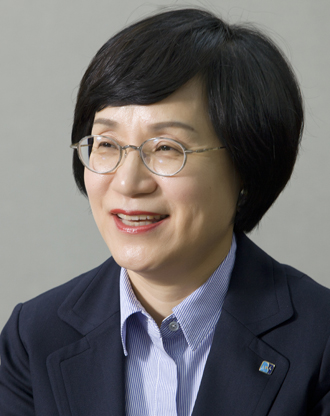 After seven months at the helm, the first female head of the Industrial Bank of Korea, Kwon Seon-joo, has shown relief at the financial institution’s results from the first half of the year.

“The bank’s performance has been great in many respects, especially in the first quarter of the year,” said Kwon, chairman and CEO of IBK, in a recent interview with Korea JoongAng Daily. “The figures for internal financial health, fiscal soundness, delinquency rates, substandard loans and allowances were all kept under control, making IBK second only to Shinhan Financial Group in terms of first-quarter profitability.”

Kwon spoke in a calm, gentle and confident manner.

“As all may know, the economy only looks good in terms of macro indicators, while many small merchants and businesses are still struggling,” she said. “Against this backdrop, we will focus on internal growth of the bank more than anything else.”

No one had high expectations of the female CEO’s leadership at the state-run bank known for its conservative, male-dominated culture. But the numbers prove Kwon’s leadership capabilities.

IBK posted 326.9 billion won ($323.2 million) in first-quarter net profit on a consolidated basis, including those of IBK Capital and IBK Investment and Securities, up 27 percent from the same period last year. Compared to the final quarter of last year, net profit surged almost 94 percent.

The bank alone recorded 332.7 billion won net profit in the first quarter, up 101 percent from the previous quarter.

Kwon emphasized the internal health of the state-run institution, which will help it to survive any unanticipated headwinds resulting from changes in government policy.

The former Lee Myung-bak administration tried to privatize the bank, but the current government decided not to and put it back on its list of public institutions.

Yet Kwon thinks the bank could be put up for sale in future, so she believes it is crucial to prepare for any scenario.

The female stewardship is also changing the male-dominated culture of the bank.

For the first time, the bank sent a female manager to its London branch this year, and it has a female deputy CEO, Kwon said.

“But we are not giving opportunities to them because they are women,” Kwon pointed out. “Opportunities are given to anyone who is ready.”

The IBK chief, who has spent her entire three-decade career at the bank, considers internal promotions crucial.

“Spending more than 30 years at one organization is an asset not only for an individual, but for the organization,” she said. “A leader who has climbed the corporate ladder for a long time can communicate well with his or her subordinates and is well aware of internal problems.”

With regard to a recent series of unethical scams at domestic financial institutions, Kwon once again highlighted the need for leaders who know their organizations well.

“Such a problem can be about pride in one’s workplace,” Kwon said. “These days, more accidents are occurring than the past as professional consciousness gets undermined. IBK is trying hard to boost employees’ professionalism and is encouraging them to take pride in the bank. If one can dream of being the CEO of his or her company, it is natural that he or she can be proud of the work.”

One of the most remarkable changes seen since Kwon took over as chairman is that executives and employees of the bank use Kakao Talk, one of most widely used short messaging smartphone applications in the country, when they need to report to the CEO.

“Messages can be about anything,” Kwon said. “Some employees complain via the app and some send me wedding invitations. And I get to know the names of our employees very easily.”

Another of Kwon’s primary goals is to make IBK a global brand. The bank opened a Beijing branch in February and is focusing on setting up a branch in India by the end of the year.

“We also are looking at Myanmar and Shanghai,” Kwon said. “Because the Korean won is not an international key currency, it is not easy to succeed in every country. We just need to keep trying by making inroads into as many countries as possible with a long-term perspective and investment.”

IBK is known as a savior of businesses, especially small and midsize enterprises. As of March, the bank accounted for 22.6 percent of loans to SMEs. It has more than a million corporate clients and reached 100 trillion won in loans for SMEs - the first in the financial industry to reach this milestone - in March 2012.

As a public bank, IBK is a strong supporter of the government’s creative economy, too. The bank currently runs a 13-member technology-finance team that provides loans and develops investment products for start-ups with outstanding technologies.

To help address the monetary problems of SMEs, IBK offers free consulting programs by employing as many as 70 professional consultants. For the past two years, it provided consultation services to more than 1,000 companies. It aims to do the same for another 1,000 by next July.

“We have been an earnest partner for SMEs by lending them a bigger umbrella when it rains,” Kwon said. “This year, we plan to support them with a total of 40 trillion won, an increase of 2 trillion won from last year.”