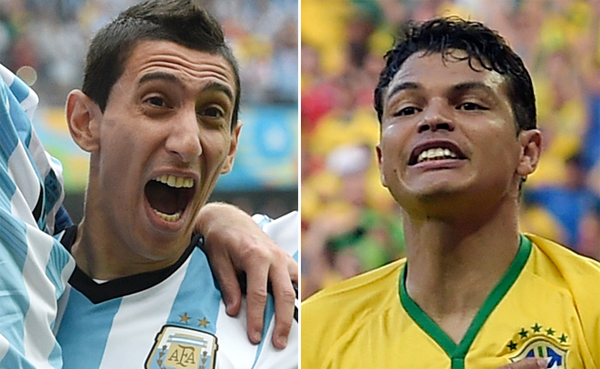 Brazil launched a desperate appeal to have Thiago Silva’s ban for their World Cup semifinal against Germany overturned on Sunday, but Argentine hopes of seeing Angel Di Maria in action were ended by injury.

Doctors confirmed Di Maria will miss the semifinal against the Netherlands because of a thigh problem, but did not rule out the winger being fit for the final should Argentina prevail in Sao Paulo on Wednesday.

“Angel has a Grade 1 injury. Of course, he won’t play in Argentina’s next game. After that, we’ll evaluate the situation day-by-day,” said team doctor Daniel Martinez.

Brazil captain Silva also was expected to miss the semifinals after picking up his second yellow card of the tournament in the 2-1 win over Colombia on Friday.

The central defender was cautioned for needlessly blocking keeper David Ospina as he was taking a kick, and FIFA said it was analyzing an appeal from the Brazilian Football Association.

His presence Tuesday would be a huge lift for a Brazilian public still reeling from the loss of striker Neymar, who was ruled out of the rest of the tournament after fracturing a vertebra in the win over Colombia.

That incident continued to appear on Sunday’s sports news bulletins on local television, but Brazil’s former World Cup-winning captain Carlos Alberto Torres hoped it might end up being a good omen for the current squad.

The 1970 skipper recalled how Amarildo and Garrincha had stepped up to fill the void left by an injury to Pele in 1962 and helped steer Brazil to the title.

Germany was sure Neymar’s absence would not weaken the challenge facing it in Belo Horizonte, with Bastian Schweinsteiger expecting Brazil to draw strength from adversity.

Schweinsteiger’s coach, Joachim Loew, however, was more concerned about the methods Brazil might use in the mouthwatering clash, wary of a repeat of the tough tackling that marked their win over Colombia.

“There’s precious little left of that traditional Brazilian style of soccer, that artistic style of playing that we all know so well,” said Loew.

“For sure, Brazil still has good technical players. But they’re playing more robustly than any other team here and they have been trying to break up their opponent’s attack that way.”

Brazil has made no apology for the 31 fouls it committed against Colombia, and Dutch goalkeeper Tim Krul was another quarterfinal victor unrepentant for his actions.

Krul replaced first-choice keeper Jasper Cillessen specifically for the quarterfinal shootout against Costa Rica, staring down his opponents and yelling at them as they prepared to shoot.

The gamesmanship resulted in him saving Bryan Ruiz and Michael Umana’s spot-kicks to set up the clash with Argentina.

“I didn’t shout anything nasty at them. I just told them that I knew where they were going,” he said. “I’m obviously trying to get in their heads and it worked.”