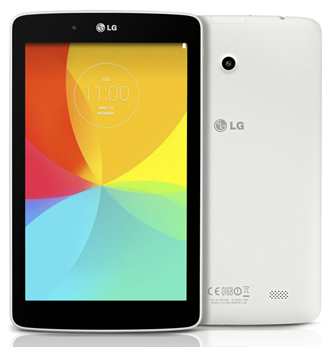 LG Electronics, in a bid to expand its share of the tablet market, has launched three new sizes of its G Pad with enhanced features, the company announced yesterday.

The electronics maker said it is increasing its range of reasonably priced, practical tablets by adding the G Pad 7.0, G Pad 8.0 and G Pad 10.1, which have a sleek, curved design.

“Its big screen and excellent grip are the biggest merits,” said a spokesman for LG. “Its large in-plane switching (IPS) and liquid-crystal display (LCD) screen engrosses users in entertaining content such as movies, videos and e-books.”

According to LG, the G Pad 10.1 features a large-capacity battery.

Some features included in the G3 flagship smartphone, LG’s latest high-end phone, also are in the G Pad tablet series. The Knock Code, a combination system that locks the tablet, was upgraded so that users can create up to four codes so the device can be used by more than one person, and the Dual Window divides the screen vertically so users can operate two apps at the same time.

Another function that comes with the tablet is QTV 2.0, which provides video-on-demand services, real-time TV, free movies and content for children.

Q Pair 2.0, meanwhile, is an application that connects the tablet PC to smartphones and allows the user to receive phone calls with the G Pad. Users can also check received messages and send a reply with the tablet through this function.

The Quick Memo allows users check memos on both their smartphones and tablet PCs.