Cheerleaders to come to Incheon

Cheerleaders to come to Incheon 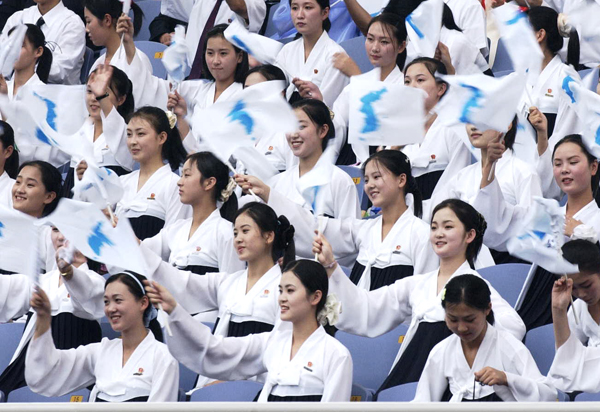 A file photo shows a squad of North Korean cheerleaders participating in the Asian Athletics Championships in Incheon in 2005. [NEWSIS]

North Korea yesterday proposed to send a squad of cheerleaders to accompany its national team players participating in the Incheon Asian Games held in South Korea in September, which Seoul officially approved.

The official Korean Central News Agency released a statement saying, “We decided to send a squad of cheerleaders to the Asian Games along with our athletes in order to create an atmosphere of harmony of people [in the two Koreas].

“We will show our will for the unification of the entire Joseon people and to melt the frozen inter-Korean relations with the heat of reconciliation.”

The statement was issued in the name of the “Republic,” which refers to the Democratic People’s Republic of Korea (DPRK), or North Korea. Seoul officials said it was the first time the regime issued a statement regarding inter-Korean issues in that name.

South Korea’s Ministry of Unification, which is in charge of all inter-Korean interactions, officially said it would accept the visit of North Korea’s cheerleaders.

“We are planning to prepare for the participation of the cheerleaders and athletes from North Korea based on international customs, through negotiations with the steering committee of the Incheon Asian Games,” said ministry spokesman Kim Eui-do at a daily briefing yesterday.

Kim added there could possibly be low-level talks between officials of the two Koreas to discuss issues involving the North Korean cheerleaders, such as accommodations or their uniforms.

Asked about the possibility of a joint cheerleading group or an inter-Korean national team, Kim said it would be difficult to achieve either.

“Forming a joint team of athletes between the two Koreas is logically difficult as the Games are just a few months away,” he said. “The matter of a joint cheerleading group is also being mulled, in terms of considering current inter-Korean relations.”

Pyongyang has recently proposed the two Koreas stop “slandering and mudslinging” each other, marking the July 4 joint communique signed in 1972 and to create a “conciliatory mood” ahead of the Incheon Games. The proposal also included a call for halting upcoming joint military exercises between Seoul and Washington called Ulchi Freedom Guardian, scheduled to start in August.

The proposal came ahead of the visit of Chinese President Xi Jinping to Seoul last week, which was the first time a Chinese leader visited Seoul before Pyongyang.

Seoul rebuffed the proposal, saying it lacked sincerity as it was always North Korea that proposed improved relations but went back on its word afterward.

At the same time as calling for a conciliatory gesture, Pyongyang conducted large-scale landing drills on July 4 in Wonsan, Kangwon, off its east coast, Seoul officials said yesterday.

“North Korea escalated military tensions with a series of missile launches right after it called for reconciliation early this year,” a Seoul official said. “This time, they continue to demonstrate a lack of sincerity by making a conciliatory proposal while carrying out military exercises in Wonsan.”