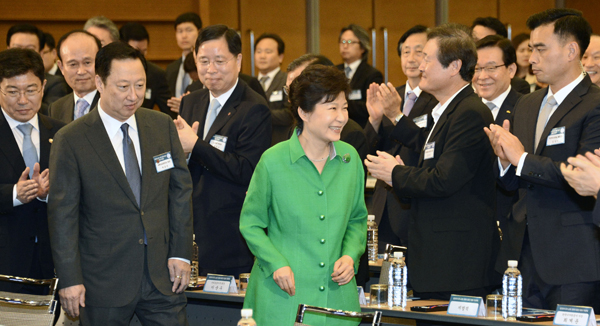 President Park Geun-hye attends a meeting of local businessmen who accompanied her on a state visit in June to three Central Asian countries - Uzbekistan, Kazakhstan and Turkmenistan - yesterday at the Korea Chamber of Commerce and Industries headquarters in central Seoul. [NEWSIS]

President Park Geun-hye yesterday vowed to continue her “business diplomacy” at a meeting of local businessmen that accompanied her on an overseas trip.

The meeting, held at the Korea Chamber of Commerce and Industries headquarters in central Seoul, was attended by representatives of business lobbying groups and small and midsized businesses executives who joined Park’s state visit to three Central Asian countries - Uzbekistan, Kazakhstan and Turkmenistan - from June 16 through June 21.

Businessmen who accompany the president on a trip commonly hold a follow-up forum to talk about the outcome of the trip, but this is the first time Park attended such an event.

“I will go wherever needed for our economy’s sake and exert every effort to step up the outcome of business diplomacy,” she said at the event.

The six-day trip around the three Central Asian countries earned Korea $31.8 billion worth of new orders and contracts.

The president noted that the many countries trying to do business with Central Asia signals the growing importance of the region, which is the basis of her signature “Eurasia Initiative.” Its goal is to tie together Europe and Asia and to induce North Korea into opening up its economy so that the peace on the Korean Peninsula will eventually be realized.

The president has been revving up her business-related events recently. She referenced that initiative in a speech at a biweekly meeting with her senior secretaries on June 30.

“If we fail to reignite the embers of economic recovery, we will be lost,” she said, admitting that economic growth has decelerated recently due to stagnant domestic demand. “We should proactively push ahead with reforms, including the three-year economic innovation plan.”

Park had a luncheon with the chairmen of local branches of the Korea Chamber of Commerce and Industry on June 24 and hosted a forum for small and midsize enterprises on July 1 at the Blue House. She also attended a business forum jointly held by Korean and Chinese business groups last week during Chinese President Xi Jinping’s visit to Seoul.

Meanwhile, the approval ratings for the president rose for the first time in four weeks, according to Realmeter, a private poll agency, yesterday.

The percentage of respondents who were negative about how the president was conducting state affairs dropped 3.4 percentage points to 46.6 percent over the same period.

The biggest contributor to the upbeat assessment, according to the agency, was Chinese President Xi’s trip to Seoul last week.

“The approval ratings for Park, which went into a downward spiral ever since she nominated Moon Chang-keuk as prime minister, rebounded largely thanks to her latest diplomatic performance,” said the agency in a release.

Moon was forced to abandon his nomination after bad publicity.