House calls few and far between

House calls few and far between 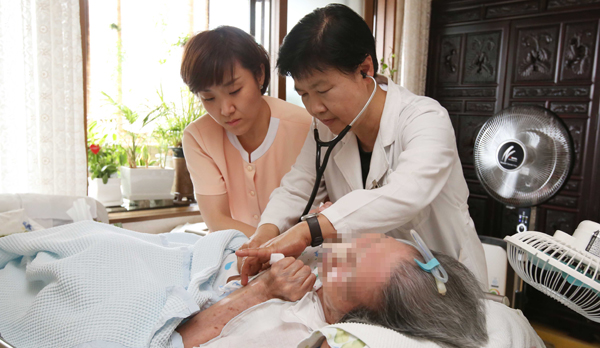 After about a 10-minute drive, they arrived at a house, where they were ushered in by Mrs. Na, whose frail mother-in-law needs specialized care.

Dr. Kwon’s patient, Mrs. Lee, 90, drifts in and out of consciousness and is unable to communicate. She is bedridden, and supplied nutrition through a feeding tube inserted through her nose. For her bathroom needs, she has a catheter.

When Kwon entered the room, everything was quiet except for the faint hum of Mrs. Lee’s labored breathing.

“How are you?” he asked her as he began his examination.

First the nurse checked Mrs. Lee’s blood pressure and the levels of oxygen in her blood to make sure her vitals were in the normal range.

Next, Kwon looked over her skin. His elderly patient had previously experienced contact dermatitis, but that had mostly vanished since his last visit after his recommendation that her diet be modified to include ground boiled eggs and soybean milk.

She looked much more stable than when he visited two weeks earlier, the doctor said.

He then finished up his visit by handing over an adhesive asthma patch to Mrs. Na.

Mrs. Lee became immobile about five years ago and has been relying on house calls since March 2010. Kwon visits her once every two weeks, and she is taken to the hospital only in case she needs antibiotic shots for pneumonia. They deal with shingles and enteritis over the phone.

“We can take care of my mother-in-law at home thanks to the doctor,” Na said. “Otherwise, we would need to take her to the hospital too often. We talk to him on the phone when she has symptoms like fever or nausea.”

“I feel more relaxed because Kwon knows her condition well enough,” she added.

Dr. Kwon is just one of several doctors in Korea who make house calls, though the majority of them visit terminal patients for hospice care. Kwon is the only one who provides general medical treatment during his visits.

Since 2001, Dr. Kwon has made house calls for 122 patients, and regularly visits 10, most of who have a difficult time making it to the hospital and are being treated for cancer, the side effects of stroke or dementia.

Domestic medical care in Korea is mostly hospital based, and doctors who make house calls have largely disappeared. The number of nurses who make visits is also declining, which forces most patients who have limited mobility to make the tedious journey to a medical center.

One patient, for example, who was taken to Seoul National University Hospital in Jongno District, central Seoul, on July 3, received medical treatment on a stretcher and was then promptly sent home.

House calls began to decline when the National Health Service, begun in 1989, rapidly increased the number of medical institutions. An average house call usually takes about an hour and a half, though the cost is equivalent to receiving treatment at a hospital, so most medical facilities opt not to offer them, especially since it requires additional time and effort from the physicians and the hospitals.

Kwon receives 50,000 won ($49.50) for one house call, though it is actually a loss when time, personnel and transportation are taken into account.

The cost of a house call by a trained nurse is around 33,800 won, with most hospitals covering the additional 7,700 won fee for travel time. For medical centers, the service means more time is lost at an unnecessary cost.

“Patients who want to be cared for at home are increasing, but hospitals are shutting down [home care] teams due to the financial loss,” said Baek Chan-gi, the head of public relations for the Korean Nurses Association.

Son Yeong-rae, head of the health insurance benefits department of the Ministry of Health and Welfare, admitted that house calls should be “encouraged in terms of human rights and quality of life of patients.”

But, he added, “if we raise the costs for house calls, insurance may not be enough to cover [these patients].”

Many people who rely on house calls, patients as well as their families, insist that there are many advantages to this kind of care.

“When my mother-in-law comes home after staying at the hospital, I can see that she instantly becomes more comfortable,” Na said. “Though the hospital is nice, it can’t be better than the house she has lived in for 50 years.”

Researchers at Johns Hopkins Hospital in the U.S. state of Maryland, echoed those conclusions in a study released in 2005, which cited that patients who were cared for at home had lower mortality rates and experienced fewer complications. The patients and their family members were also more satisfied with the quality of care, the researchers said.

“Quality of life is higher among patients cared for at home because they are less stressed and are less likely to be exposed to infection,” said Kang Myeong-sin, a professor of dentistry at Gangneung-Wonju National University. “And it is more effective when house call doctors are combined with home care nurses.”