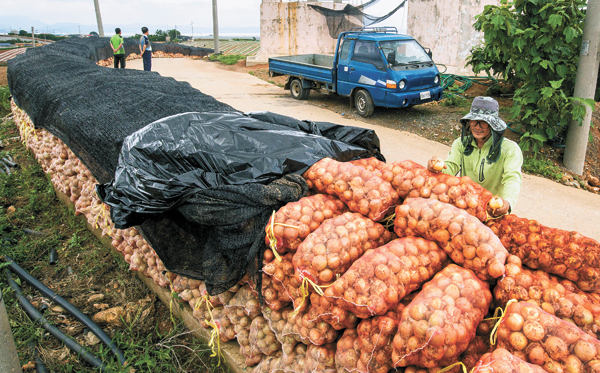 Jang Yoo-choel, a farmer living in Muan County, stares at unsold onions stacked along a road in Muan County, South Jeolla. Farmers like Jang planted a lot in expectation of a cold winter and now have an oversupply. By Oh Jong-chan

On a roadside in Yangrim Village in Muan County, South Jeolla, piles of onions stretch 50 meters (164 feet). Farmers in the area, one of Korea’s biggest onion-producing regions, have too many onions on their hands.

The crop was good, their storage barns are already filled, and they have no alternative but to stack them along the road.

“We produced 200 tons of onions this year but only managed to sell 10 tons,” said Jang Yoo-choel, a 47-year-old farmer living in the county.

“So farmers just stack the onions on the road,” Jang continued. “No one would be tempted to steal them. They’re barely worth anything these days.”

A warmer-than-expected winter is the main culprit. Last fall, the Korea Meteorological Administration forecast that the winter would be harsh, and the farmers paid heed. In fact, the temperatures were mild compared to previous years.

“When farmers hear that the winter will be cold, they expand the area of farming to produce more - because the prices of farm products are bound to increase in the cold weather,” said Choi Byung-wook, an agricultural specialist at the Korea Rural Economic Institute. “That was exactly the case for many farmers. They harvested more, expecting the prices to surge.”

And onions are only one example of agricultural goods that have been hit hard by the wrong forecast.

Lee Byung-hwan, who grows cabbages in Cheongju, North Chungcheong, planted a 6,600-square-meter (7893-square-yard) field. But he has not been able to sell a single cabbage. “I’m told that I can sell them at 30 percent of last year’s prices,” Lee said. “I never imagined things would turn out this badly.”

Lee is considering plowing under half of his cabbage crop.

A change in people’s eating habits has also contributed to a dwindling demand for some farm products.

“Onion juice was popular among older people thanks to its health-enhancing properties,” said Jeong Wook, executive director of Okban Food, which sells extracts like onion juice.

“But these days, people have moved on to other fads like nut products or dried blueberries,” he continued, “so sales of onion juice has steadily decreased. Last year, they were 5 billion won, down from the previous year’s 7 billion won.”

The Ministry of Agriculture, Food and Rural Affairs has stepped in to help. The ministry purchased 4,000 tons of cabbages and 2,000 tons of white radishes to assist in exporting agricultural products.

“I know that farmers are really distressed because demand is far lower than supply,” said Lee Dong-pil, the agriculture minister.