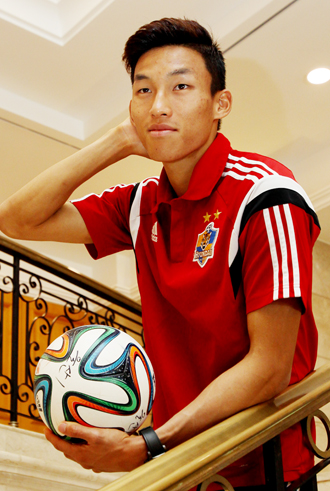 When Korea was eliminated from the 2014 Brazil World Cup with a record of one draw and two losses, Coach Hong Myung-bo and many players such as Park Chu-young were heavily criticized. But Kim Seung-gyu of the Ulsan Hyundai Tigers, who was the goalkeeper against Belgium in the last Group H match, was an exception to the flurry of criticism. With an impressive performance on the field - including seven saves - Kim was considered a star who could potentially defend Korea’s goal again four years from now. Ilgan Sports, an affiliation of the Korea JoongAng Daily, sat down on Monday in Suwon, southern Gyeonggi, with the 23-year-old to hear about his stories from Brazil.

Q. It has been a week since you returned to the country from Brazil. How do you feel?

A. I’m still very tired because I think I still have jet lag. I played a full game against Seongnam FC on Saturday in the K-League Classic, but I think I need more time to get back into my best shape. I was a little sleepy before the match. [Laughs]

It seems like you have became the most popular player on your team. So many fans were waiting to get an autograph from you after the match.

Yeah, it feels like I’m Cinderella. Fans recognize me even when I just walk on the street and they ask me for an autograph. I also heard that I’m leading the All-Star Game voting in the K-League, which I wasn’t even able to be a part of. [Laughs]

Do you think it is because you did well in Brazil?

I was so nervous until right before the match started, but after playing on the field for a few minutes, the tension was gone. I didn’t actually feel much pressure at that moment.

You weren’t able to start in the first two matches against Russia and Algeria. How did you feel about that?

I actually thought I might return to Korea without getting a chance to play in the World Cup because [Jung] Sung-ryong started the two previous friendly matches [against Ghana and Tunisia] we had before the event, so I tried to learn something by watching the games on the field. I also understood that it is a hard decision for the coach to change his goalkeeper during an event.

Were you happy when you were informed that you were going to start against Belgium?

I found out in the meeting the team had on the match day. I was happy, but also worried about the fingers on my right hand, which were injured when we were training in Miami. The injury was quite serious, and I was afraid that the team might send me back home.

Did you continue training?

I had some injections to get rid of the pain in my fingers and I tried to use my left hand more than my right. Fortunately, most shots attempted by Belgium came into the left side. [Laughs]

People say your ability to react to the ball is the quickest in the league.

I think it is my natural ability. Most players wanted to be a striker when they were young, but I always liked the goalkeeper position. I started wearing ski gloves that looked similar to goalkeeper gloves when I played football with my friends after I watched goalkeeper Kim Byung-ji playing against the Pohang Steelers in 1998 when I was 8 years old. He actually scored a winning goal in that match.

There are opinions that the national team should replace Jung Sung-ryong.

When the Belgium match ended, Jung came to me and told me that I was the best player. I was happy for a few seconds, but soon felt sorry for him.