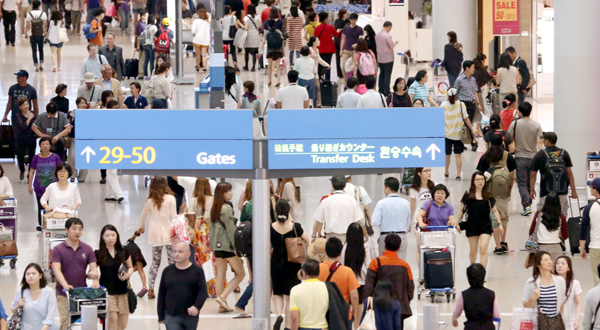 The Korea Institute for Industrial Economics and Trade has called for raising the ceiling on duty-free purchases by Korean citizens to $600 from the current $400 to reflect increasing per capita income.

At a public hearing yesterday at the Seoul Main Customs office in Nonhyeong-dong, southern Seoul, the institute released the results of its study on appropriate limits for duty-free purchases, which was commissioned by the Ministry of Strategy and Finance.

The ministry has been contemplating the issue as consumer complaints exploded in recent years and the number of Koreans traveling overseas surged.

In its presentation the institute argued that a $600 per person limit on duty-free purchases would not be a burden for a country where per capita income is $26,000. 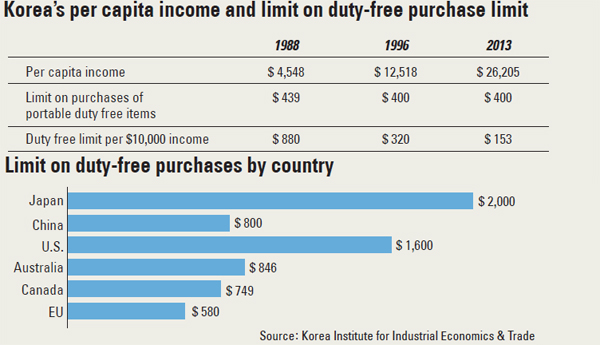 The customs authority also restricts citizens to one bottle of liquor, one carton of cigarettes and 60-milliliters of perfume at duty-free shops.

The number of Koreans who have been slapped with additional taxes for not reporting items worth more than $400 purchased at duty-free shops has more than tripled in the past three years, and it became an issue last year.

At a parliamentary probe of the customs agency in 2013, a proposal to raise the $400 maximum purchase amount triggered disagreement between lawmakers and government officials.

The institute’s report said rising per capita income is an important reason for raising the ceiling.

Compared to major countries like the United States and Japan, Korea’s duty-free ceiling is considered low, the report pointed out.

“Once the limit is increased, welfare benefits for consumers will increase significantly as they become able to make more purchases when they travel,” said Choi Bong-hyun, a research fellow at the institute.

“Korea’s image as a country that pursues free trade will improve overseas and the government will be able to reduce customs administration costs.”

The report estimated that a $600 limit would result in a total of about 115.3 billion won in duty-free purchases annually, while reducing tax revenue by 23.1 billion won.

“There should be further studies and a social consensus on the issue,” said an official at the Finance Ministry.

“The current limit is outdated for an era of more than 1 trillion won in direct overseas purchases,” said Lee Chul-ho, a senior columnist at the JoongAng Ilbo, who took part in the hearing as a panelist.

But some were opposed to raising the limit.

“It is not fair in terms of tax fairness, because travelers shouldn’t be subject to tax exemption,” said Kim Kap-soon, a professor of business administration at Dongguk University.