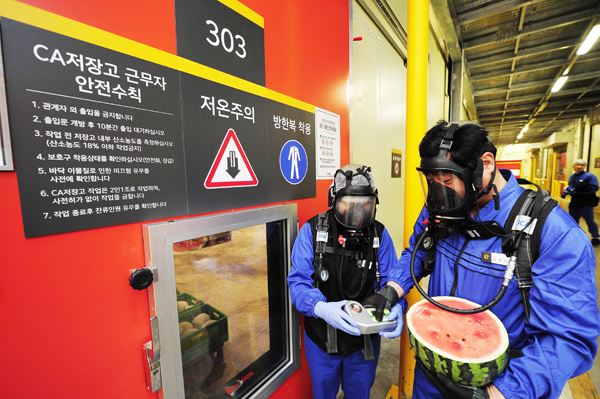 Employees at E-Mart’s Icheon Fresh Center in Gyeonggi check the sweetness of a watermelon that has been stored inside a room where the atmosphere is controlled to maintain the fruits’ freshness. Provided by the company

ICHEON, Gyeonggi ­- Unlike the weather outside yesterday, it was cool inside E-Mart’s Fresh Center in Icheon, Gyeonggi, where the company keeps its fruits and vegetables before they are distributed to its nationwide stores.

When touring the center, the bright red doors of the 19 storage rooms stood out. Lee Hong-duck, branch manager of E-Mart’s Icheon Fresh Center, said that behind each door was a controlled atmosphere (CA) storage system, a technique in which the level of oxygen in the air is reduced and carbon dioxide is increased.

This change in air composition extends the time period that fruits and vegetables can stay fresh.

This year, through its research, E-Mart, a large discount store owned by the Shinsegae Group, found an ideal environment for extending the freshness of watermelons and Korean lettuce, which are particularly vulnerable to price fluctuations during monsoon season.

“By significantly lowering the portion of oxygen in the environment, we are able to almost suspend the aging of produce such as watermelons,” Lee said.

This allows E-Mart to increase the maximum storage period for watermelons from three days to 10 days, while maintaining the same sweetness.

“Many experts have noted that it’s almost impossible in reality to extend [the marketable] life, particularly of Korean lettuce and watermelons,” said Lee said. “This is innovative.”

E-Mart became the first Korean retailer to use the controlled atmosphere storage system in 2010. Since then, it has been testing air compositions to find the best carbon dioxide to oxygen ratio for keeping different fruits and vegetables fresh.

In the past year, E-Mart conducted dozens of tests to find the best controlled atmosphere for Korean lettuce and watermelons. Unlike apples and pears, which can be stored for a relatively long period of time after harvest, watermelons dry out fast.

“During the monsoon season, the average sweetness falls by two to three degrees Brix and also the price surges [because of demand and supply],” Lee said.

“The CA storage system that we have offers suppliers a stable supply channel and a stable price range for consumers.”

The discount store plans to increase the volume and variety of produce stored in its CA rooms, but for now E-Mart said that it will sell a batch of 10,000 watermelons that were kept fresh using the new technique starting Thursday.