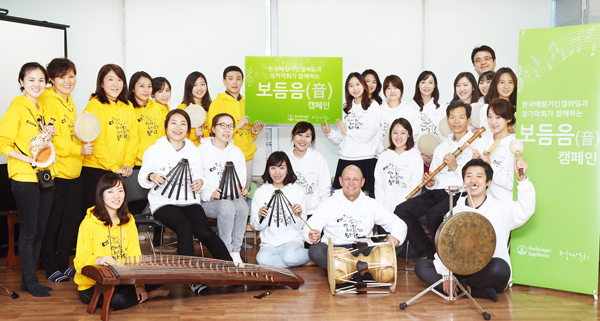 Employees participating in the “Bodeumem” campaign pose with the traditional instrument they teach.Provided by the company

Boehringer Ingelheim Korea, the local unit of the German-based pharmaceuticals company, is devoted to building a healthier society. Its endeavors range from improving medical technology by sponsoring research to direct care of its neighbors in need.

In association with the Korean Academy of Medical Sciences, the company established the Wunsch Medical Award in 1990 after Richard Wunsch, the first German physician who worked in Korea. The doctor was Emperor Gojong’s personal physician from 1901 to 1904, but also served to improve the nation’s hygiene conditions and the health of its residents.

The winner of the award is selected under strict evaluation from the organizing committee and judges who comprise of medical authorities. Each year, the winner of the main award and two winners of the Young Scientist Award are rewarded cash prizes. Its reputation as the Korean Nobel Prize for medicine for the last two decades has made the Wunsch Medical Award a great honor for its awardee.

Whereas the award brings indirect benefit to the health of the general public, “Bodeumem,” a musical therapy program for mentally challenged people, provides direct help to where it is needed. Bodeumem is a portmanteau of the Korean words “embrace” and “music.” The program aims to improve the mental and bodily functions of the mentally challenged through traditional instruments.

Together with Jeong Ga Ak Hoe, a Korean traditional music ensemble, Boehringer Ingelheim developed an educational program and tailored traditional instruments especially to the disabled. A group of 20 employees visit their students every Friday for eight to 12 weeks for the special education program. Their efforts result in a touching performance by the students. The Korea Employers’ Federation and the Association of Korean Journalists selected the campaign as the grand prize winner for its corporate social responsibility in March 2013.

The company also holds an annual charity bazaar at the company’s headquarters and raises funds for Haesimwon, an orphanage, and welfare organizations in Hoehyeon-dong, central Seoul.