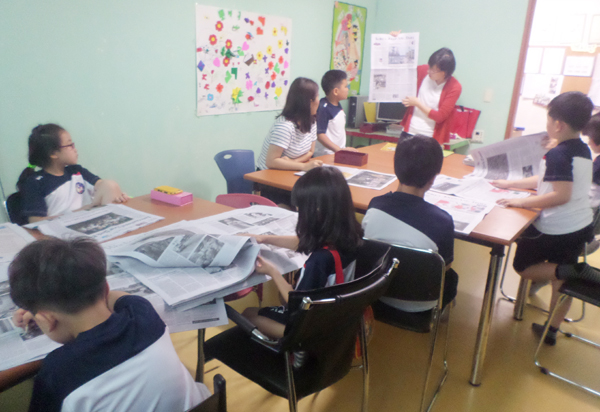 Students participate in group activities with the Korea JoongAng Daily at the Community Child Center. Provided by the company

The global business environment today has shifted from one that focuses on companies simply making a profit and growing in size to one that involves them to be engaged in various social activities and become respected corporate citizens. The business environment in Korea is no exception. Many companies - mainly of large conglomerates - are actively engaged in social corporate responsibility (CSR) activities as they shift their corporate values to giving back to the society what they have reaped.

Earlier this month, the United Nations Global Compact Korea Network organized the annual Global CSR Conference at Kyunghee University and there, Lee Seung-han, president of UNGC Korea and chairman of Homeplus, highlighted that CSR is a worldwide stream that no one can refuse to follow. Lee added that consumers today judge a company for how it promotes well-rounded corporate growth rather than the speed or size of corporate expansion.

According to the Federation of Korean Industries’ Corporate Community Relations Whitebook 2013, money spent on CSR by 225 major companies last year mounted to 3.25 trillion won ($3.2 billion), which is up 5.2 percent from 2011. Hyundai Motor Group’s donation to Community Chest of Korea 2013 was 25 billion won, and in total its donations between 2003 and 2013 amounted to 134 billion won. LG Group also donated 12 billion won and SK Group, 10 billion won.

There has also been a newly created term called creating shared value (CSV), which is a business management philosophy that pursues profit in a way that also generates social values. There have been growing calls in the business environment in Korea that businesses should strive for the concept of CSV by not just simply donating money but having their employees participate in volunteering activities at charity organizations.

Amid this trend, foreign companies based in Korea, which in the past tended to shy away from CSR activities, have also rolled up their sleeves in recent years and are active in social responsibility projects. For example, BMW Korea in July, 2011 established a foundation for CSR. One of the main activities pushed by the foundation is its “Seed School” program, which is an after-school mentoring program that supports about 200 students to self-develop by donating to the Korea JoongAng Daily. This is in line with the Korea JoongAng Daily’s “Contents Sharing Campaign.”

The Korea JoongAng Daily, as the first player in the media industry, has partnered with Community Chest of Seoul to run a campaign that supports English education for children from low income families. From last January, the Korea Association of the Community Child Center in 197 areas in Korea were provided with the Korea JoongAng Daily with financial support from local units of various foreign companies including GSK Korea, Merck Korea, Janssen Korea and Pfizer Korea, which all together raised 202 million won to provide the English newspaper to trigger children’s interest in English and also help them learn the language.