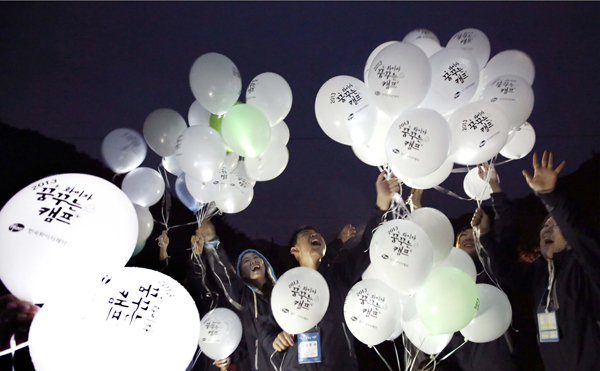 Mentors pose with balloons at Pfizer Dream Camp, part of the company’s campaign to support children from GCGP families.Provided by the company

Pfizer Korea, the local unit of the international pharmaceuticals company, values the development of the community as much as the development of new drugs. The company runs various corporate responsibility programs to improve the quality of life for all.

The company is especially concerned with the global aging phenomenon. Pfizer’s campaign “Healthy Aging/Get Old” aims to stimulate the public’s interest in healthy aging and solve problems related to the increasing elderly population.

The campaign, which has been running since 2012, persuades community members of all ages to have positive attitudes on the fact that the population is aging. Individuals from many countries such as the United States, Germany and Turkey started to face the issue and get ready for the coming physical and psychological effects that relate to the aging population.

Korea is the first among Pfizer’s Asia-Pacific unit to run the “Healthy Aging/Get Old” campaign. Last December, the company surveyed the local population to gain insight into the values of elderly life and the aging process. While answering questions, the respondents were also informed on how society can sometimes be negligent of its aging populations and how this issue applies to everyone.

Pfizer Korea’s other campaign supports children raised by their grandparents (GCGP families) in association with the Korean Medical Women’s Association and ChildFund Korea. The main goal of the campaign is to complement the elderly guardians in child care to provide full parental care to their grandchildren.

From July 2010, 50 children have been under the care of employee volunteers. Each volunteer is matched to a child to be his or her mentor to guide them to their dream. The volunteers help celebrate the events such as birthdays, Children’s Day and Christmas because elders may not be familiar with such celebrations and could easily miss out on the chance to make good memories for the children.

In addition, the children in need of financial support for their education are provided with the monthly Pfizer Scholarship. In order to ensure their mental and bodily health, the company provides Pfizer Dream Camp for the children from GCGP families to participate each year.

The company’s sincere care for its young community members is publicly recognized. In 2011, Pfizer received a mayoral award from the Seoul Metropolitan Government for its support of GCGP families. The company also provides aid to domestic and international catastrophe victims, such residents in the Philippines who were affected by the typhoon last year.

“It is imperative for the company to earn greater respect from society,” commented a Pfizer Korea official.