Baidu CEO wants Korea and China to cooperate on tech

Baidu CEO wants Korea and China to cooperate on tech 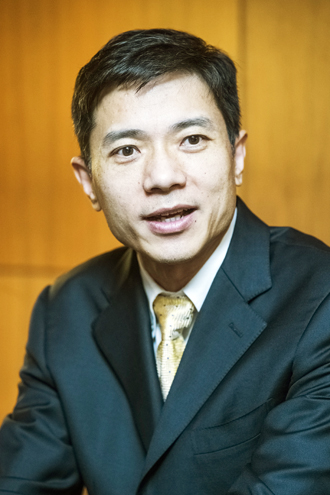 Robin Li, the CEO of China’s largest online portal Baidu, said he wants to break into the Korean market with the company’s business model, which has been successful in spreading Hallyu in China.

On Friday afternoon, Li, dressed in a well-pressed suit, was rushing into a cafe in Shilla Hotel, central Seoul. As the company’s founder, he is listed as one of China’s richest men along with Jack Ma, executive chairman of the world’s largest e-commerce company Alibaba Group.

Li, who came to Seoul last week as a member of Chinese President Xi Jinping’s business delegation, had a brief meeting with Oh Young-ho, CEO of the Korea Trade-Investment Promotion Agency (Kotra), before the two countries’ business cooperation forum.

The meeting lasted only about 10 minutes, but the two executives made the most of their time, agreeing to a memorandum of understanding in which Baidu becomes a bridge for bringing Korean corporate information to China.

“Kotra is doing the same in Korea through Naver, the nation’s largest web portal. I would also like to cooperate with Baidu,” Oh said during the meeting.

“I know Naver very well,” said Li, with smile on his face. “Almost 600 million Chinese people visit Baidu every day. It is in line with our business strategy to work together to offer investment information about Korean companies to China.”

In his first interview with Korean press, Li told the JoongAng Ilbo at the business forum and in an additional written interview that he “believes in the power of technology” as the best representation of his business philosophy and his company’s future.

In addition to his desire to explore the Korean market with Baidu, Li predicted that there will be more opportunities for joint work between the two countries as Hallyu’s cultural content continues to gain popularity. Along with the trend, Baidu also decided to enter in cooperation with SM Entertainment, one of Korea’s largest K-pop agencies.

Q. What was your first impression of Korea?

A. I was very surprised during my first visit to Seoul in 2004 at the fact that every retail store has a website URL on its signboard. I could feel how strong the influence of the Internet was to Korea’s daily economy. For the past decade, Korea has developed the world’s strongest online network, as well as mobile telecommunication and smartphone device technology at the world’s top level.

I visited Korea last year at the invitation of Samsung Electronics Vice Chairman Jay Y. Lee, as Samsung and Baidu have carried out joint projects for the past few years. I hope to see more of such exchanges and coordinated business projects between Korea and China.

The Financial Times last year ranked Baidu at 33 and Samsung Electronics at 30 for its top 100 global brands list. This year, Baidu jumped up to 25, leaving Samsung behind at 29. What was the secret to that development?

It was the power of technology. The only thing our users get to see on the Baidu website is the simple search bar, but we have been continuously developing various technologies behind the scenes. Baidu holds language and image identification technologies at the world’s top level. For instance, if you saw a beautiful flower but couldn’t remember the name of it, you can search not just by its name but also by biological characteristics by simply taking a photo of it and using Baidu’s image identification function.

In the first six months of this year, Baidu also started researching intelligence at its newly established artificial intelligence and brain research center in the United States, since other global IT giants like Google are also showing interest in the area. The research project, featuring renowned brain scientists like Andrew Ong, has already produced intelligence technology as smart as a child at the age of 2 to 3 after studying more than 20 billion units of neurons. Once we obtain artificial intelligence at the level of a teenager’s mind in the future, technologies to apply this intelligence will become new territory.

What are potential areas in which Baidu can cooperate with Korean companies?

As the Internet will continuously lead to changes and jazz up our lives, social networking services [SNS] are one of the most significant directions in which these advancements will occur. I am emphasizing the importance of SNS to our developers and staff.

Joint projects are increasingly being carried out on SNS between Korea and China. Baidu is not just a central platform for Chinese online culture, but also a large marketplace where Korean cultural content such as drama series and K-pop songs can expand their influence in China. About 20 million Chinese bloggers are registered in online Hallyu fandom communities, nearly 40 percent of Korea’s total population.

Technology research and development, I believe, is another area where companies from the two countries can cooperate.

Since Baidu signed an MoU with SM Entertainment in early May, when are you planning to enter the Korean market?

Baidu will have a license to distribute SM’s K-pop music and video content in China. The project is gaining global interest not just because it shows business cooperation between Korea and China, but also as a strategic project between the online and entertainment industries. I believe there will be more such opportunities in the future.

China is among the world’s top countries for its number of Internet users, while Korea is one of a few countries with the fastest Internet networks. So, I would like to pursue the Baidu business model, which succeeded at home, in Korea. In particular, I am planning to expand our PhotoWonder, a photo-editing and posting app, in the Korean market although I haven’t decided the timeline yet.

Li obtained an undergraduate degree in information management at Peking University and studied computer science at the University at Buffalo in New York, where he obtained his master’s in 1991. He was known to have been asked if there was a computer in China at his graduate school entrance interview. He started his IT career at Dow Jones, where he created a financial information search program, and The Wall Street Journal, where he edited the newspaper’s online edition.

He also worked as an engineer at Infoseek, a Silicon Valley-based search engine developer, where he realized the potential for new businesses in the field.

Li returned to China in 1999 and created Baidu in an old hotel room the following year. Baidu dominated the entire Chinese online market in its first three years. The company was listed on the Nasdaq in 2005, when it gained the nickname the “Google of China.” The company then entered the Japanese market in 2008.

Li is now one of the richest people in China, with personal assets of about $12.2 billion.