Chung to create a safety committee

Chung to create a safety committee 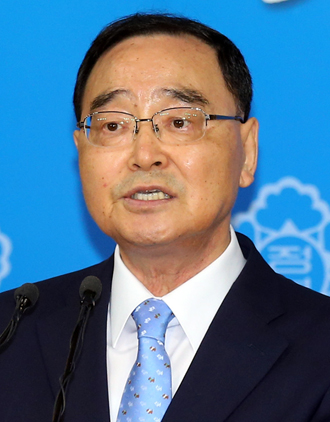 As the latest follow-up measure to the April 16 Sewol ferry disaster, Prime Minister Chung Hong-won said yesterday that he will launch a committee comprised of civilians and government officials in an aim to remodel the country and make it a safer place.

“The nationwide committee will include subcommittees in the area of public office reform, security innovation, exposing corruption and awareness reform, and will set the agenda through collecting a wide range of people’s opinions,” said Chung during a press conference at the government complex in central Seoul.

This marks Chung’s first official activity as prime minister following an impasse after he tendered his resignation on April 27 to take responsibility for the Sewol maritime accident.

Chung was reinstated at the end of last month because two nominations by President Park fell through after receiving bad press.

“This time around, a sure system has to be prepared to ensure that no more accidents that endanger people’s lives and safety will occur,” said Chung, “and the corruption rampant in our society has to be eradicated.”

He emphasized the importance of coming up with a master plan for safety innovation, which will be “plentifully discussed in the committee and be completed by next February.”

The prime minister said he and a civilian will jointly lead the new committee.

Chung will head Park’s second cabinet after major reshuffling following the sinking of the Sewol, which led to public outrage at the government’s shortcomings in rescue efforts.

Since the maritime catastrophe, which left nearly 300 dead, Park has promised to root out the bureaucratic mafia, or gwanfia - a term coined by the public who are disgusted with the kind of rampant corruption that may have caused the tragedy. The word is a portmanteau of the Korean word for officials, gwalyo, and mafia.

Chung’s announcement came as the Board of Audit and Inspection concluded in an interim probe yesterday that corruption by some government officials and inadequate government regulations contributed to the ferry’s sinking. The prime minister listed the energy, sports and business sectors, among others, as areas in which Korean society needs to eradicate corruption.

“We will make a firm change to enforce the awareness of public officials that safety holds the greatest value, which cannot be interchanged with anything else,” pledged Chung.