Repeat juvenile offenders get off to a bad start

Repeat juvenile offenders get off to a bad start 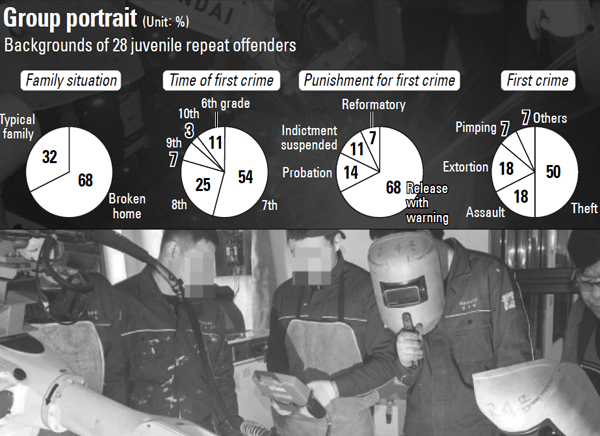 Kim Dong-su, a prisoner at Gimcheon Correctional Institution for Boys in North Gyeongsang, has a criminal record as long as his arm and he’s only 19. He’s been convicted 21 times, largely for burglary.

Kim’s parents divorced when he was a baby. He thought the aunt and uncle who raised him were his parents until he learned the truth at the age of 8.

When he reached middle school, Kim moved in with his father, but he rarely saw him. Kim ran away from home with seven other friends. They needed money to live and one of his buddies suggested breaking into an empty house.

They ransacked the place, but the owner showed up. One friend was caught and the rest turned themselves in at the police station.

They were questioned but released because they were minors.

At school, no one made a big deal of Kim’s brush with the law so he concluded that theft wasn’t a big deal. He repeatedly robbed empty houses and stole motorbikes. Convictions were stacking up, but courts kept releasing him. He felt invulnerable.

Finally, at age 15, Kim got caught for robbery while he was still on probation from his last arrest. He was sent to a reformatory for 15 months.

It wasn’t that bad. Kim got used to the routine after three months. Inmates woke up, washed, ate, studied computer skills, wrote Chinese characters and attended personal ethics classes. Kim wanted to talk to someone about how he ended up there and what he should do with his future, but counseling wasn’t offered. He spent the 15 months thinking that he wanted his freedom and wouldn’t commit any crimes in the future.

Kim was discharged in 2011. He tried part-time work to earn money he might use for music classes - he dreamed of being a musician - but he got fired every time his employer found out about his criminal record.

Kim robbed a house and ended up with a prison term of a year and nine months. He was sent to a correctional facility in Gimcheon in April 2013. Once again, he is vowing to walk the straight and narrow when he gets out of prison in January. He will be 20. His teenage years will have run out in a prison.

Kim is one of around 10,000 Korean juveniles aged 19 or younger with five or more criminal convictions. He is one of the 28 juvenile offenders sent to correctional facilities or reformatories with multiple convictions that JoongAng Ilbo reporters met between last October and last month.

According to the Ministry of Justice, a total of 107,452 juvenile offenders were arrested in 2012, outnumbering the population of Sejong City (103,000) that year.

Most of the 28 teenage repeat offenders interviewed by the JoongAng Ilbo have troubled family histories. Kim was an example of teenagers who began committing crime after experiencing divorce or some other disruption in their family - and don’t learn to stop after their first punishment.

Children with intact homes are more likely to be corrected after committing a crime. It’s different in broken families and leads to repeat crimes.

“When they can’t be corrected by their parents, giving juveniles warnings and releasing them is just like sending them back to a world of crimes,” said Lee Su-jeong, a criminal psychology professor at Kyonggi University. “When releasing juveniles, [authorities] should find institutions that can replace families.”

The teens interviewed by reporters said things would have been different if they were punished strictly the first time they committed crimes. They wish authorities had corrected them since their families were not able to.

“I only recognized that I should not commit crimes when I was sent to a reformatory after my second crime,” said one of the interviewees, who has 12 criminal convictions.

Another teen said, “I was not even scared to go to the police stations because they just let me go after making me write letters of apology. So I ended up [committing crimes] again with my friends.”

Nineteen of the 28 inmates were raised by grandparents or single parents or grew up at orphanages. Because they had no one to talk to at home, they hung out with friends outside, which led to run-ins with the law.

Twenty five committed crimes before the age of 14, and did not receive criminal punishment for early infractions. The most common first crime was theft, reported by 50 percent of the interviewees, followed by some kind of assault and extortion (36 percent).

For their first crimes, 19 were released after warnings and seven were put on probation or had their indictment quashed. Only two were sent to reformatories after committing more serious crimes such as pimping.

Those not sent to correctional institutions were sent home, where often there were no figures of authority.

When teens got out of reformatories, they were often isolated by their schools.

“When I came back to school from a reformatory at 16, I was told to stay alone with a teacher for a month,” said an inmate at the correctional institute. “I used to read textbooks alone in a classroom for extracurricular activities, but I finally couldn’t stand it and ran away.”

The isolation sent them back to their gangs, which taught them to steal cell phones and motorbikes or commit fraud by deceiving people on online second-hand markets.

“When I committed crimes with my friends, I wasn’t afraid,” said an interviewee. “We robbed stores at random, and when my friends were beating up someone, I joined without asking why.”

There is a common psychological history among many teens who repeatedly commit crimes: they were hurt by being abandoned by their families or society in childhood. Experts say there should be measures to help them overcome such wounds.

Shalom Youth Rehabilitation Center, for example, is helping teen offenders feel more secure and adjust to society. The center, located in Changwon, South Gyeongsang, is where Yoo Su-cheon and Park Seon-ok take care of 13 former juvenile offenders, providing them room and board.

Feeling cared was not something these teens understood from their pasts. But they end up calling Yoo and Park “mom” and “dad,” and are trying to change themselves.

“About 60 kids have lived here so far, but only three to four kids have gone back to criminal behavior,” said Park. That is significantly lower than the average juvenile reoffending rate of 42 percent last year.

Although alternative homes like Shalom Youth Rehabilitation Center have been proven effective, they are on a tight budget. The government subsidizes 400,000 won ($395) a month per person, but that barely covers meals and living expenses.

Operators of the facilities sometimes spend their own money or try to find donations for special activities like going to theaters or going on picnics.

“Alternative homes are doing a great job,” said Cheon Jong-ho, a judge in charge of juvenile affairs at the Busan Family Court. “But they cannot help the teenagers settle down in society with, say, vocational training because of a lack of budget.”