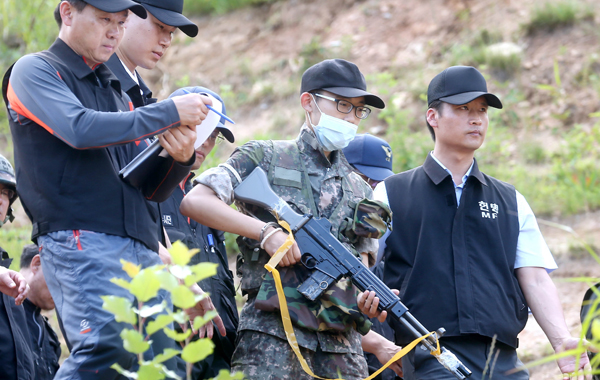 The South Korean Army has requested an arrest warrant for a first lieutenant who was in charge of a frontline picket on charges that he ran away after the deadly shooting spree by a Korean Army sergeant.

The Army’s central investigation team said on Monday the military prosecution has requested a detention warrant for the lieutenant, surnamed Gang, for neglecting his duty as the head of a picket - a group of soldiers who keep watch - at the General Outpost of the 22nd Division, located on the eastern frontline.

General outposts (GOPs) are military camps on the border of the demilitarized zone.

According to investigators, Gang was sleeping in his office when 22-year-old Sergeant Lim fatally shot five of his fellow soldiers and injured seven more in a rampage that stunned the nation. Gang was supposed to be working in the situation room of the GOP, the military said.

When he heard gunshots, Gang fled from his office to a nearby picket post, the military said.

“Gang went AWOL from the scene when the accident happened, and he was also neglectful of combat preparations in the management of rifles and keys [in the weapon storage box],” an Army official told reporters. “He is suspected of abandoning special military service and negligence in war preparations.”

Gang, however, told the Army he moved to the neighboring post in order to report the situation to his superiors.

The Army did not accept his excuse.

“The head of a picket post should have reported to his superiors while staying at the scene,” the official said. “It is a grave crime, a neglect of his duty, for him to have fled the scene after hearing the gunshots.”

The Army said it usually takes 20 or 30 minutes on foot to move from the post where the accident occurred to the neighboring post. It added that Gang also was negligent in managing the keys to the gun storage box.

Because he fled, other soldiers had difficulty finding the keys after the shooting started, the military said, so they wasted time in countering Lim in the initial stages when lives could have been saved.

“A staff sergeant finally broke the storage box and distributed the weapons and ammunition,” the Army official said.

Lim’s lawyer said Gang was not one of the superiors who allegedly bullied him.

Previously, Lim detailed in a suicide note how he had been ignored by his fellow soldiers, including the lower ranks, and had difficulty fitting in.

By law, a military tribunal decides whether to issue a detention warrant for a soldier on active duty.

Lim was brought to the scene yesterday to reenact the time line of events in front of family members of the victims so the military could determine how he fled and countered those pursuing him.