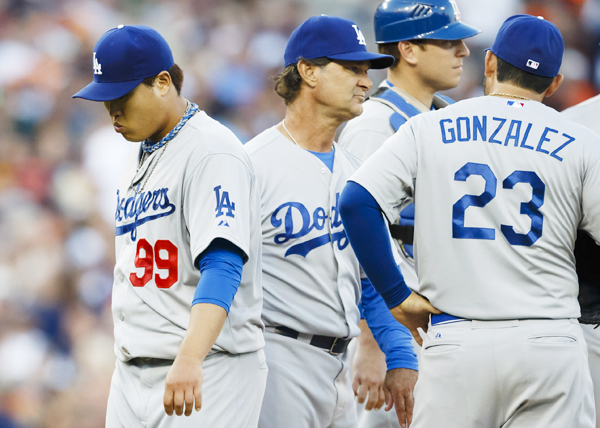 Los Angeles Dodgers starting pitcher Ryu Hyun-jin, left, walks off the field after being relieved by Manager Don Mattingly, center, in the third inning against the Detroit Tigers at Comerica Park. [USA TODAY/NEWS1]

Ryu Hyun-jin of the Los Angeles Dodgers might have thought he could pick up his 10th win of the season after his teammates scored five runs in the top of the first inning against Detroit Tigers starting pitcher Justin Verlander.

But things didn’t work out to his advantage as he quickly allowed seven runs in two and one-third innings after finding it difficult to control his pitches. The Tigers went on to beat the Dodgers 14-5 on Tuesday, local time.

Verlander allowed five runs including a two-run homer to Dodgers third baseman Juan Uribe in the first, but he retired the next 13 in a row while Detroit destroyed Ryu with eight hits in the second inning. Torii Hunter led off with a double, which was initially ruled out at second, but the call was overturned on a video review challenge by the Tigers dugout.

Ryu then allowed four consecutive singles to Nick Castellanos, Alex Avila, Eugenio Suarez and Rajai Davis to make it 5-3, and Ian Kinsler hit another run with an RBI single. Miguel Cabrera followed with another RBI, tying the game 5-5.

The rally continued in the third inning. Davis hit an RBI single and Austin Jackson’s sacrifice fly put the seventh run on the scoreboard, making Dodgers Manager Don Mattingly pull the 26-year-old Korean from the game.

“I totally let my team down,” Ryu told Korean media after the game. “The worst part of the night was that I blew away the early five-run lead.”

In the two and a third innings, he allowed 10 hits and two walks while only striking out two. The eight hits he allowed in the second tied the Dodgers’ franchise record for most hits allowed in one inning. It was also Ryu’s sixth MLB career game in which he allowed double-digit hits in a game and the second since June 1 against the Pittsburgh Pirates.

Due to the poor performance, his 3.08 ERA has skyrocketed to 3.65 and Ryu is now 9-5 in the season. He is scheduled to make his last first half start against the San Diego Padres on Monday.

“I don’t feel any differences in facing an American League team,” Ryu said. “It just was a bad game for me because nothing worked out. I had a hard time controlling my pitches and some of them were located high. I had to throw strikes because I often got behind in ball count and the Tigers hitters attacked well on those pitches.”

Ryu also had a hard time dealing with the home plate umpire’s tight and inconsistent strike calls. Mattingly was ejected after he complained about the strike call made to Adrian Gonzalez with a 2-1 ball count in the top of the sixth with one out. It was his second ejection of the season; the first came on May 10 against the San Francisco Giants.