Much of Munch’s oeuvre now at SAC

Much of Munch’s oeuvre now at SAC 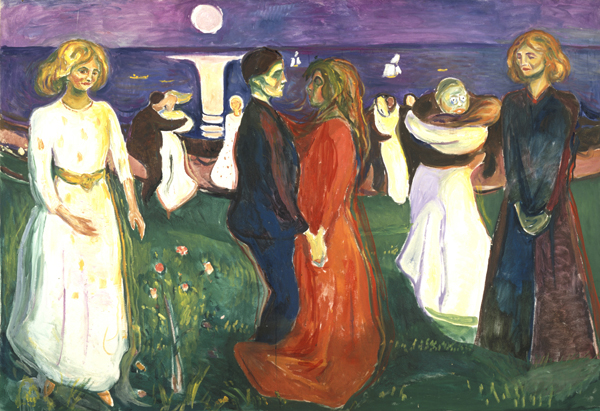 “The Dance of Life” is the motif that Norwegian artist Edvard Munch, who is best known for “The Scream,” repeatedly painted. This version, which he painted in the 1920s, is part of Munch’s first retrospective in Korea, “Edvard Munch and the Modern Soul” at Hangaram Art Museum of Seoul Arts Center in southern Seoul. The show runs through Oct. 12. Provided by the museum

“There is no doubt that Edvard Munch’s ‘The Scream’ is a masterpiece, but its popularity sometimes overshadows the artist’s other works, which are also important and diverse in terms of media and themes.”

This is what Jon-Ove Steihaug, chief curator of the Munch Museum in Oslo, Norway, said repeatedly in front of an enlarged copy of a lithographic version of “The Scream” at Hangaram Art Museum in southern Seoul last week.

The copy decorates a wall besides the entrance to the exhibition, “Edvard Munch and the Modern Soul,” which includes the real lithograph version of “The Scream” and other 98 pieces by the Norwegian artist, including paintings like “The Kiss,” “The Dance of Life” and “Starry Night.”

It is the first earnest retrospective of Munch (1863-1944) in Korea. The exhibition of the Expressionist art and general modern art pioneer started a week ago at the museum located in Seoul Arts Center. The exhibits are loaned by the Munch Museum.

“We have the world’s largest collection of Munch’s art, 28 000 works, representing nearly two-thirds of his entire works,” said Munch Museum Director Stein Olav Henrichsen, who was attending the press preview of the exhibition along with Steihaug. According to the Munch Museum website, they include “1,150 paintings, 17,800 prints, 7,700 drawings and some photographs taken by Munch himself.”

The exhibition in Seoul is divided into five sections. The first, “Munch Himself,” consists of the artist’s self-portraits and portraits of his family members. The section starts with “Self-portrait in Hell,” an ominous but attractive painting with strong red-and-black colors and flame-like strokes in an Expressionist style. Then, the viewers are led to black-and-white photos of Munch, which were taken by the artist. 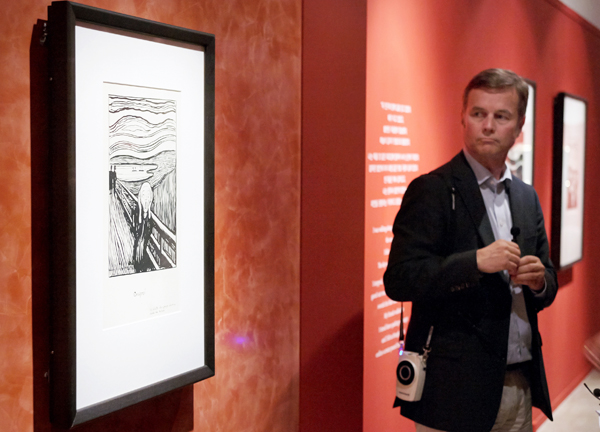 Jon-Ove Steihaug, chief curator of the Munch Museum in Norway, explains about the lithograph version of Munch’s “The Scream” at the artist’s retrospective at Hangaram Art Museum in southern Seoul. Provided by the museum

“Munch is said to be the one who took a selfie for the first time,” Steihaug said with laugh. “He was greatly interested not only in photography but also in films. This exhibition ends with one of his short films.

“In addition, he was a revolutionary printmaker,” he continued. “Munch was an experimental and daring innovator in terms of media as well as themes that dealt with the psychology of modern people.”

The second section, “Modern Breakthrough,” includes prints and drawings by Munch depicting the literary lions that influenced him.

Among them is the portrait of Norwegian playwright Henrik Ibsen, who is famous for “A Doll’s House” and “Ghosts.” As for “Ghosts,” Munch was strongly impressed by the play and later participated in its stage design, according to the Munch Museum.

“One of Munch’s characteristics is dramatic images - his paintings will remind viewers of a scene from a theater drama,” Steihaug said, explaining the influence Munch’s contemporary playwrights had on him.

Among the exhibits are two lithograph versions of “The Sick Child.” Munch’s original is a painting he made in 1885 or 1886 based on the memory of his sister. His sister and his mother died untimely deaths during his youth. The works show a sense of loss as well as existential anxiety, fear and questions about death. 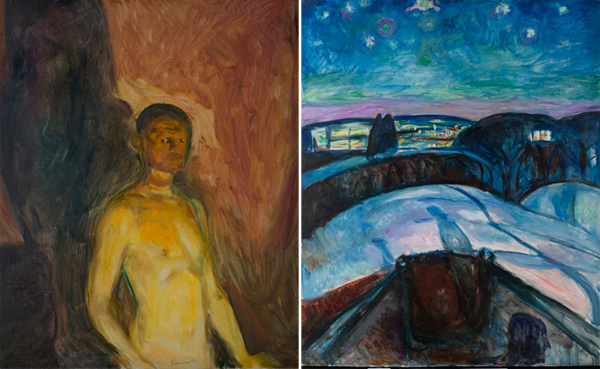 “Self-portrait in Hell,” left, and “Starry Night,” right, are also part of the exhibition. Provided by the museum

The section also presents the lithographic version of “The Scream” with Munch’s poem-like writing about the painting featured on the red wall.

After “The Scream,” viewers are led to three print versions of “The Kiss” - a summary of love and pain.

Viewers then encounter the painted version of “The Kiss” and two other paintings, “Vampire” and “Jealousy,” which both depict a man captivated and incapacitated by a femme fatale or his own desires and emotions. They will remind viewers of eros versus thanatos, the drive of life, love and sexuality against the drive of death, which, according to the Freudian idea, coincide within and among individuals. At the end is “Dance of Life” and other large paintings by Munch that depict the cycle of life and death.

Munch created several paintings with the same motifs and, slightly regrettably, the paintings on display in this Seoul show are not the most famous versions. Still, the exhibition includes most of the important motifs, so it will help viewers in Korea understand and take an interest in Munch’s oeuvre, as the Munch Museum officials hope.