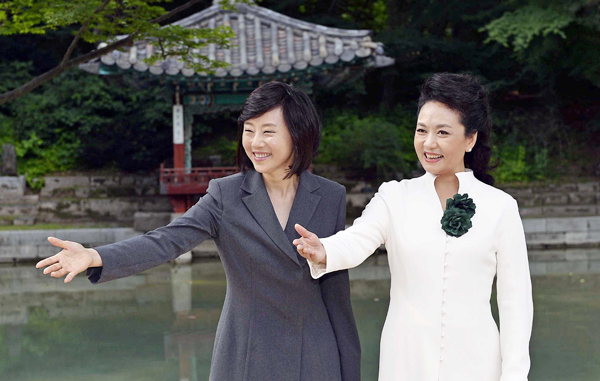 “Power dressing” makes politicians project their tendencies and political message through what they wear. Former British Prime Minister Margaret Thatcher started the trend. When a female politician became the prime minister of one of the world’s superpowers, her dress sense began to make headlines. She liked to wear silk blouses and skirt suits and carried a black briefcase instead of a handbag. It was said that the briefcase indicated her assertiveness and her choice of a blue suit revealed her identity as a Conservative to the core. Thanks to the over-analysis, the power suit became the stereotypical fashion statement of female politicians.

Since Thatcher, the fashion of female politicians has become an open subject. When former U.S. Secretary of State Madeleine Albright changed her brooch, the media interpreted current foreign affairs issues through it. German Chancellor Angela Merkel likes to wear uncharacteristic pant suits with no feminine details, and people like to make inferences to her political philosophy from the designs. For some time, Korean media came up with various meaningless analyses on what President Park Geun-hye wore. People seem to think that women speak through what they wear.

First lady style received the spotlight because of Jackie Kennedy. Thanks to the backing of her wealthy father-in-law, she had fashion designer Oleg Cassini create her signature look, and she became an icon who made her husband shine. First ladies are expected to play the role of style evangelists as well. Those in Western countries are especially expected to promote designers and the fashion industry of their country. Complicated interests such as these have turned the analysis of first lady fashion into a genre of media in the West.

Last week, Chinese President Xi Jinping and first lady Peng Liyuan visited Korea, and the news about the Chinese first lady was mostly about her fashion sense. Her white dress symbolized the Korean tradition of dressing in white and her choice of a green brooch meant reconciliation. But if she had worn red, it would be interpreted as passionate friendship. Pink would be a honeymoon between Korea and China.

When it comes to fashion, any interpretation can be applied. Fashion choice doesn’t mean much.

Some media were busy comparing Peng with President Park or her senior secretary for politician affairs, Cho Yoon-sun. But why should the president and the presidential secretary, who are busy with state affairs, compete against the Chinese first lady in fashion? Cho, who was in charge of protocol for Peng, was wearing a very formal suit for her role. A female politician’s power dressing is completely different from a first lady’s fashion in its purpose and interpretation. Is the President expected to compete in fashion with the wife of another president just because she is a woman?

It is a Western convention to discuss fashion. Old Western novels often have scenes about society women talking about what other ladies wore. They would say someone had ordered her dress and hat from Paris or criticize the fabric. They derided or complemented others on their style. Westerners have a tradition of discussion fashion, and the interpretation of what female politicians wear reflects their cultural background.

It is taboo in Korea to judge people by what they wear, so fashion discussions are not very advanced here. But of course, we need to be able to discuss style in order to keep up with global trends and promote Korea’s fashion industry. People are more interested in stories than fashion itself. But if we want to discuss fashion, we need insight and taste. It is pathetic to overanalyze the meaningless fashion of women just because they are female.