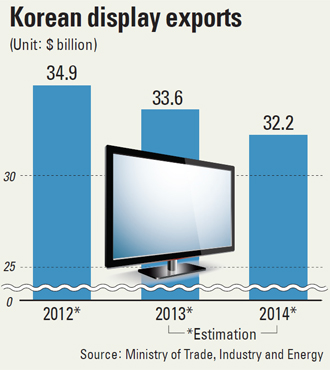 The Ministry of Trade, Industry and Energy yesterday announced that it would take proactive measures to prepare for the future of the IT industry, as celebrations of high first-half exports were muted by the dying display industry and emerging Chinese ICT manufacturers.

Though Korean display and television exports were up in the first six months, industry researchers are predicting a drop in the second half. In the first half, ICT exports recorded a record high of $83.8 billion, up 3.2 percent compared to the same period last year.

With the threat of losing competitiveness in the global display market, the Trade Ministry and local display giants including Samsung Display and LG Display yesterday introduced a plan to form a 30 billion won ($29.6 million) joint fund for R&D projects over the next five years.

The consortium, in cooperation with the two giants’ suppliers and state-run research institutes, aims to develop next-generation displays. The R&D projects will look to improve OLED displays, commercialize flexible screens and develop technology for foldable displays and transparent displays.

“Because the television and mobile device markets have already matured, the Korean industry is heading toward developing future technologies,” said Kim Hyun-seok, an industry researcher at Korea Display Industry Association. “For instance, the industry is focusing on transparent displays that can be made into a car’s dashboard and front window and transparent public advertisement displays, in our search for new sources of growth.”

China is the biggest threat to Korea’s top spot as the Chinese display industry, which only had 2 percent of the market share in 2009, has grown by more than five times in three years.