Convenience stores give glimpse into society

Convenience stores give glimpse into society 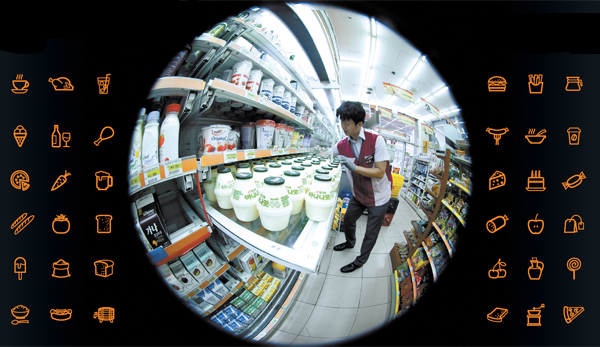 The customer waiting at the counter for two bottles of flavored water wasn’t happy with how long I was taking to scan his beverages.

The problem was that the water was on a buy-one-get-one-free promotion, but the total kept coming up as 2,200 won ($2.20), the price of two bottles.

As I stood staring at the till in confusion, my co-worker told me to punch in the subtotal. I did, and the price halved.

“Thank you and good bye,” I told the customer. He didn’t answer.

It was June 26, the day before the FIFA World Cup football match between Korea and Belgium, and this reporter had landed a temporary part-time job at a convenience store located next to the Cheonggye Stream, Jongno District, central Seoul.

Ahn Jae-chun, 57, the owner of the convenience store, thought people would fill the streets of downtown Seoul to root for the national football team, so he hired two more part-timers for the day, including me.

Ahn used to work as a banker, but he retired when the 1997 Asian financial crisis hit the entire nation. He opened a convenience store, like many retirees do.

“I managed between 70 and 80 employees when I worked for a bank, but running this convenience store is much harder because part-timers work a few days and say they want to quit,” he said.

After some small talk with the owner and my fellow workers, the night shift began. At around 9:30 p.m., a truck loaded with snacks, beer and beverages came to the store, and we had to move all the products into the warehouse. Each load was as high as a well-built man.

When the clock struck midnight, one of the part-timers with salt-and-pepper hair handed me a banana-stock from the previous day.

“It’s better to eat when we can. Today’s bananas look good,” he said.

Most food at the convenience store is scrapped or consumed by part-timers once it has passed its shelf life. 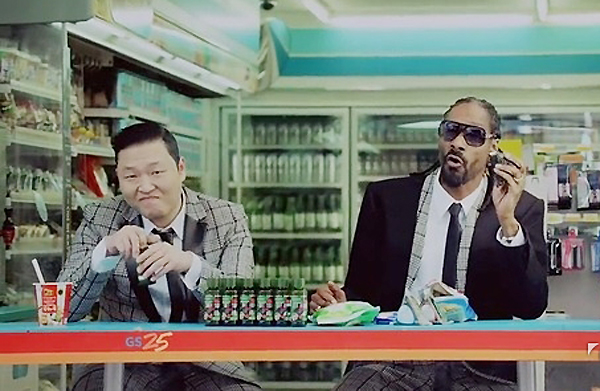 Convenience stores often feature in popular culture. Most recently, singer and rapper Psy chose a convenience store as one of the locations for his new release, “Hangover.” In it, he drinks a hangover cure and eats instant noodles with Snoop Dogg to ease the pain from the night before in the music video. [JoongAng Ilbo]

Soon, a group of college students barged in and grabbed beer, soju and snacks. We instantly restocked the shelves.

But the Korean national football team lost, 1-0, to Belgium and we had fewer customers than we expected.

“Sales are not good,” said the manager with a sigh.

Twenty-five years have passed since the very first convenience store hit the local market in 1989. We use these stores almost every day, but when the first one opened it garnered attention because no store stayed open for 24 hours a day until then.

Unlike mom-and-pop grocery stores, everything inside convenience stores was neat and tidy, and people could eat and drink inside the shop.

Convenience stores have become part of our lives over the last 25 years. Their number reached 24,000 in 2012, meaning we have one convenience store for every 2,000 Koreans. Even remote islands like Mara and Baekryeong have the 24-hour shops.

And now people can do a lot more than eat a bowl of instant noodles at their local store: we can take cash out from the automated teller machine, pay utilities, recharge our smartphones and send parcels.

The omnipresent convenience store even inspired young filmmaker Kim Kyung-mook, 29, to create the feature film “Futureless Things,” which depicts a day at one of the 24-hour institutions. The movie shows our lives through the eyes of clerks in their 20s and 30s.

Kim moved to Seoul 11 years ago after dropping out of high school. He first used convenience stores to ease his hunger with cheap food such as samgak gimbap (triangular-shaped seaweed rolls), but he later found himself using the ubiquitous shops for many of his everyday rituals like dropping off his laundry or paying utilities.

As Kim explained, part-timers at convenience stores do not try to socialize with the customers. They don’t even make eye contact with them.

“I felt that the convenience store was a perfect place to show one facet of this individualized and modernized society,” Kim said.

In the film, young part-timers encounter strange customers who seem to resemble the oddballs one often encounters in real life.

Just like in the film, the convenience store is oftentimes a first leap into society for many teenagers and people in their early 20s.

Between part-time jobs, he uploaded a video of himself dancing in a Mickey Mouse costume and the video became popular among teenagers in his neighborhood.

“Many people recognize me because of the video clip,” said Lee. “I think I can get closer to my dream sometime in the future.”

To some, however, convenience stores symbolize a harsh society that exploits young and vulnerable workers for cheap, hourly wages.

“I’m entitled to receive one day of extra pay if I work up to 40 hours per month, but the owner didn’t pay it,” said So Jae-in, 24, who works for a convenience store in Seoul. Her name has been changed for the sake of her privacy.

“The owner also refused to sign on a labor contract because he didn’t want to pay health insurance for me,” she revealed. “But I put up with him because this place pays me more than other convenience stores.”

But store owners also have their side of the story.

According to a survey conducted last year by the Korea Federation of Small and Medium Businesses, 32.7 percent of convenience store owners said they are in deficit, while 58.7 percent said they feel fierce competition because there are simply too many similar stores.

Eventually, some shops try to differentiate themselves from others by providing unique services. For example, one convenience store in Gwangjin District, eastern Seoul, allows customers to buy things on credit. The owner of the store covers the losses with his own money and later receives unpaid bills from regulars.

A convenience store inside Olympic Park, Songpa District in southeastern Seoul, serves tteokbokki (rice cakes in a red pepper sauce) and fish cakes every morning so that elders who visit the park for a walk can drink makgeolli (rice wine) with food.

Another convenience store in Daehangno, central Seoul, offers a study space that is equipped with a large computer screen and a whiteboard.

Anyone can walk into the convenience store, so clerks oftentimes have to handle people from all walks of life whether they want to or not.

Kim Ji-young, 26, who works at a Myeong-dong branch of 7-Eleven, was afraid of the homeless in the beginning, but she now tries to be friendly to them after a positive encounter where a homeless person begging for a meal past its shelf life returned to pay for it at a later date.

And convenience stores not only hold the stories of young people, they also include those of older people in their 40s and 50s.

Hong Jung-un, 54, is one of the older people working at one convenience store. She began to work at the mart after her husband’s business flopped.

“It’s not easy to work here,” said Hong. “You have to stand all day long and you often skip meals. In addition, you have to be kind to customers all the time.

“But I’m so grateful that I can work at my age,” said the middle-aged woman with a grin.